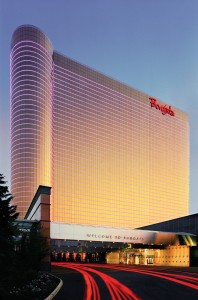 In this blog post I am going to reveal to you a flaw I currently have in my game. I am also going to explain the actions I am taking to fix it. I hope you enjoy this candid look into my mind.

I recently had the pleasure of playing the $3,500 Borgata Poker Open World Poker Tour event. I must admit, Borgata has done an excellent job of cultivating their poker community and constantly growing their games. They were one of the first casinos to lower the buy-in of their main events to $3,500, which made it much easier weak players satellite into the main event, making the event quite profitable for professional poker players, despite the decreased buy-in.

(As a brief aside for those who do not know, Expected Profit = ((Return on Investment x Buy-in) – Rake))

On both Day 1a and 1b, I got lots of money in good and only a bit in bad, so I am happy with that. Believe it or not, I somehow got all-in with a set on BOTH days and lost to a draw. Fun times!

I think this event was one of my best tournament showings to date. I focused well and generally made accurate reads. However, there is one hand I butchered, which I will discuss later in this posts.

I have been focusing hard on trusting my reads. In a recent webinar I hosted with perhaps the best people-reader in poker, Phil Hellmuth, he discussed how he trusts his reads entirely. In the past, I have been a bit afraid to blindly trust my reads, especially when they didn’t make logical sense. Below are two hands where I had overly strong reads. On the first, I trusted them and on the second, I let my analytical brain control my actions, leading to devastating results.

Everyone at the table told me what an amazing call it was, but in my mind, it was fairly easy. I needed to win around 32% of the time to break even based on the pot odds. If my opponent had a strong hand, such as Q-Q or 6-6, I have somewhere between 23% and 30% equity, making my call a small loser. If he had a set, I am drawing nearly dead, which would be a disaster. However, I thought he would tend to slow play a set most of the time. If he had any unpaired draw, I have between 45% and 60%, meaning I should call. If he was losing his mind with a random unpaired hand, I have between 75% and 85% equity.

Of course, you cannot simply average these numbers and see where you stand. You have to figure out how much of his range is made up of each type of hand. For example, if he only has overpairs in his range, I have an easy fold. If he has overpairs and draws, I have to reluctantly call. If he is running a lot of bluffs, I have an easy call.  That being said, it is difficult to know if your opponent is capable of running an insane bluff for all of his chips for no good reason.

Luckily for me, I had developed fairly strong reads on my opponent. First off, he was clearly tilty. He seemed like someone who was capable of thinking, meaning I thought he at least somewhat knew what he looked like to me. After I continuation bet the flop, he instantly went all-in. This made me think he either had a premium hand, a draw, or nothing. Since I am in fine shape against both nothing and a draw and it is very difficult for him to actually have a premium hand on this board, his quick all-in made me think my hand was in at least marginal shape.

I am sure I also picked up on some subconscious tells I am not even aware of. You will find that after you play poker every day for around five years, you simply “know”. This is one of those spots where I was about as confident as I could be that he was bluffing.

This next hand was my bust-out hand from the tournament.

Despite a nice start to the day, getting to 100,000 chips, I found myself back with a short stack after making trips and losing to a full house then losing with 5-5 versus A-K.

The flop came Ks-Qd-4c. The Small Blind checked. The Big Blind thought for a few seconds before checking. I got the drift that he wanted to bet but elected to check instead. I decided to bet 2,600 to hopefully induce the Small Blind to lose his mind and raise me with air, which he was certainly capable of. The Small Blind quickly folded and the Big Blind thought for around a minute before saying “Raise” and putting in a 5,000 chip. He was told he had to put in 5,200, which he did. I elected to call.

The turn was the (Ks-Qd-4c)-8c. My opponent thought for a while before asking me how much I had left in my stack. After that, he went all-in. I called and lost to his Kd-Qc.

Where Did I Go Wrong?

While checking back the flop would have saved the most money, I think betting the flop for value, protection, and perhaps to get the Small Blind to spaz out is mandatory. However, once the tight passive amateur in the big blind check-raised, I think I should have found an easy fold.

His weird flop check plus his misclick min-raise should have made it blatantly clear to me that he was not messing around. If you are unaware, when someone tries to raise and is so excited that he cannot figure out 2,600 x 2 in his head, he usually has a premium hand.

I somehow convinced myself that he might take this line with A-Q, Q-J, J-T, or perhaps and K. Obviously my thought process was awful. This specific opponent was simply NEVER messing around in this spot.

Given my flop call, I do think calling off on the river is somewhat mandatory. I don’t like it, but I think it is the only play that makes sense as I expected him to go all-in with his entire flop check-raising range, which I thought contained some worse made hands that I beat. It is worth mentioning that when someone asks you how much you have left before going all-in, he usually has a premium hand. K-9 loses to all premium hands. Maybe I could have saved my last 13 big blinds.

Before I conclude this post, I want to mention that it takes an incredibly high amount of skill at any game to accurately figure out the difference between bad luck and bad play. While my bust-out hand could be simply viewed as a cooler where most players go broke every time, I do not see it that way. I view my bust-out hand as a purely avoidable situation. Although folding the flop would have only saved me a paltry 18 big blind stack, I should have folded and tried to run up my stub.

I want to make it perfectly clear that I am not looking back at this hand and thinking “I clearly played it wrong because I lost.” I do not care in the least bit whether or not I lose a poker hand, regardless of the stakes. All I care about is making good decisions that win equity in the long run. While I feel like I do a good job of that most of the time, the K-9 hand was a clear mistake. I have to make a point to not commit the same error twice.

What can I learn from this?

Throughout this tournament I made numerous good calls and what I believe to be a few good folds. However, it is obvious to me that, especially when stacks start to shrink, I become much more inclined to make decisions based purely on the math I learned many years ago as an online player. When you have almost no reads on your opponent, all you have to rely on is math. That is not the case with live poker.

Given I have worked hard to develop fairly strong reading abilities which seem to be accurate way more often than they are not, I should rely more heavily on them. 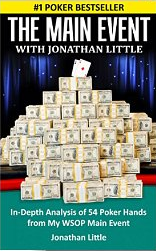 In the future, I will work harder on making big folds. The problem with being good at folding is that you usually need your folds to be right a huge percentage of the time whereas your calls rarely need to be correct in order for them to be profit, due to pod odds. This problem leads me to often call off a bit too wide, especially against reasonably active players.

There you have it! I need to put more trust in my reads, especially when it comes to folding.

Now that I have put this out there for everyone to read, expect me to never fold again!

If you enjoyed this type of hand analysis and want more, I strongly suggest you check out my book The Main Event with Jonathan Little.

Thank you for reading. Good luck in your games.

5 thoughts on “Two Blatantly Opposite Hands from Borgata”