I was born on December 22, 1984 in Pensacola, Florida. From an early age, I loved playing games and excelled in school. Before poker, I played the card game “Magic: The Gathering” with my friends, starting when I was 12 years old. Playing locally and in numerous major tournaments in the southeast United States, I became ranked as high as 9th in the world in the Vintage format of Magic.

As I got older, I shifted to poker. I was not naturally good at the game but after a year of nearly constant study, I became a winning player. When I was 18, I focused exclusively on online poker. I started with a $50 deposit playing $.25/$.50 limit hold’em and moved up to the $15/$30 level.

Eventually, I decided there was not enough room in my life for poker, studying engineering and psychology at the University of West Florida, and a full-time job at an airport fueling airplanes. Something had to go! After two years of grinding all three activities, I decided to quit my job at the airport, which I loved, and shortly after, also quit college. This decision would change my small town life forever.

I continued to do well at online poker. Because $30/$60 limit was the largest game online at the time and I wanted to continue progressing, I decided to make the move to single table no-limit hold’em tournaments, also called Sit ‘n Go’s or sngs . I jumped right into the largest games and was immediately successful, but later went on a downswing (I probably wasn’t too good at sngs) and lost quite a bit of my bankroll.

I decided to go back to $11 games and learn from the bottom up, just as I did with limit hold’em. After months of practice, studying, and learning from others, I became one of the top earning sng players in the world, usually playing 16 games at a time.

When I turned 21, I decided to start traveling the live tournament circuit. My first major live cash was in the Party Poker Million WPT event, held on a cruise boat. I took my mother (Rita), father (Larry), and younger brother (Garrett) on the Caribbean vacation with me. I won my seat into the event in a $1,000 online qualifier and cashed for $16,000. It was a great trip!

That same year, I took 2nd place in the PokerStars Sunday Million tournament. That win brought in $90,000, nicely padding my bankroll. Back on the live circuit, I failed to have any sort of major score for the rest of 2006; 2007 would prove to be very different.

I continue to travel the high stakes live poker tournament circuit on a regular basis. If there is a large event in the U.S. or Europe, you can find me there. I also play high stakes online tournaments when I am outside of the U.S. I am ranked in the top 100 poker players in the world, according to the Global Poker Index. 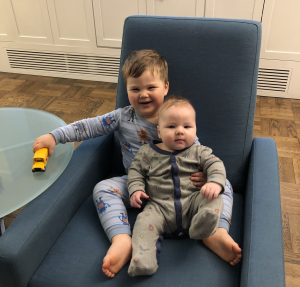 I currently split my time between New York City, Europe, and Canada. I am married to the wonderful Amie Broder, a lawyer from Brooklyn, New York. When I am in NYC, I spend most of my time with my two sons James and Thomas, coaching students at PokerCoaching.com, writing poker books (so far, I have authored 14 books, including the best-selling Excelling at No-Limit Hold’em) and cultivating my training site, PokerCoaching.com. I enjoy working out, eating right, hiking, reading, and progressing in all aspects of life.