Every year at the WSOP, I witness amateurs commit blatant errors on a regular basis that are easily fixable. In this blog post, I am going to share with you a few of these errors.

When a professional shows up at your table, do not let him know that you fear/respect/admire him, especially if you plan to stay out of his way. By doing this, you tell him your game plan within a few hands instead of making him learn it over the course of a few orbits. Perhaps a good strategy would be to tell the pro that you fear him, play passively for a few orbits, and then run an insane bluff? It would probably work on me!

Don’t make it obvious you have a strong hand by instantly betting when you are strong and taking your time when you have a marginal or weak hand. I assumed most players had their timing tells under control, but this year, that was not the case. I made a few tight folds when my opponents acted quickly and also some hero-calls when they took too much time. While I am certainly not saying you should stall, you should not instantly bet when you have the nuts.

Most of the reasonably strong players did not like to fold this year. One hand comes to mind where a good player raised to 2.5 big blinds from first position, the Small Blind called, and I called in the big blind with Jc-8c. Everyone had about 100 big blinds, which was a ton of chips, nearing the bubble. The flop came 8s-8h-2s. The Small Blind checked and I decided to lead for 7 big blinds. Only the good player in first position called. The turn was the 6c. I bet 20 big blinds and he called. The river was the 3h. I went all-in for 70.5 big blinds into the 62.5 blind pot. My opponent thought for a few seconds and called, awarding me the pot. My opponent thought that my lead-bet-bet line was “obviously” a busted draw as no one with half a brain would take that line with an 8, right?!? While this play worked out amazingly well this time, I wonder if simply check-raising the flop, betting the turn, then pushing the river would work equally well. While I assume my opponent looked me up with an overpair, perhaps my line against this specific player handcuffed him into having to call me with a wider range compared the obviously strong line of check-raising the flop. Maybe he looked me up super-wide, perhaps with 4-4 or A-K. What do you think? 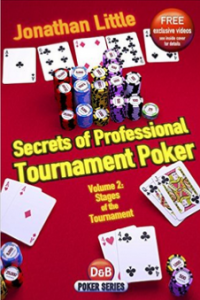 A lot of my opponents were complaining about the temperature in the tournament room. I wrote about this in Secrets of Professional Tournament Poker, Volume 2, but apparently, my opponents didn’t read that chapter. If it is cold (as it usually is at the Rio), put on a jacket or drink a hot beverage. Personally, I dress in a 3-Bet T-shirt and jeans on most days. I put a light jacket in my backpack. I have yet to get tilted by the temperature.

Get off your phone!!!! It seems like most poker players, especially “professionals”, want to take their minds off the task at hand. Of course, if they are trying to make money, they should be paying attention. I found that if I turned off my phone and put it in my backpack, I would not worry about it. I would then check my messages on my breaks, if I felt inclined. While it took a bit of time to get used to not having my phone readily available, I can confidently say that I picked up many more reads this year, which I think helped me have a great summer. If I had been buried in my phone, I would have likely missed them.

Watch the live coverage online (Scroll back through the videos to find the final tables). This year, David Tuckman did an excellent job commentating the final tables. Especially during the high stakes events, he had numerous world-class commentators in the booth, adding in-depth insight. I almost never watch poker on TV, but this year, I watched a lot of the live streams.

I hope you found this article to be helpful. If you made any interesting observations that you want to share with other readers, please post them in the comment section below. I would love to hear them! I will be back next week at JonathanLittlePoker.com with another educational blog post. Thanks for reading!