In this blog post, I am going to share with you (in no particular order) 10 pros who had a huge impact on my poker career. Some were private coaches and I battled others on the felt, but all left a positive lasting impression on me.

David “Raptor” Benefield was my first online poker friend. I used to lurk on an old poker forum and one day I posted that I was “jcardshark”, the unknown guy who was tearing up the $215 buy-in sit n’ go’s on PartyPoker. David, one of the most popular online players of the time, messaged me and asked if I wanted to talk strategy on AIM, which of course I did. We became great friends and talked through AIM basically every day for three years while we grinded the sit n’ go’s. David was one of the first people to do what was thought to be impossible: play 4 tables at the same time. I quickly followed suit. He then moved to 16 tables and I did the same. I seemed to always be one step behind him, but that was fine because he was (and still is) ten steps ahead of everyone else. 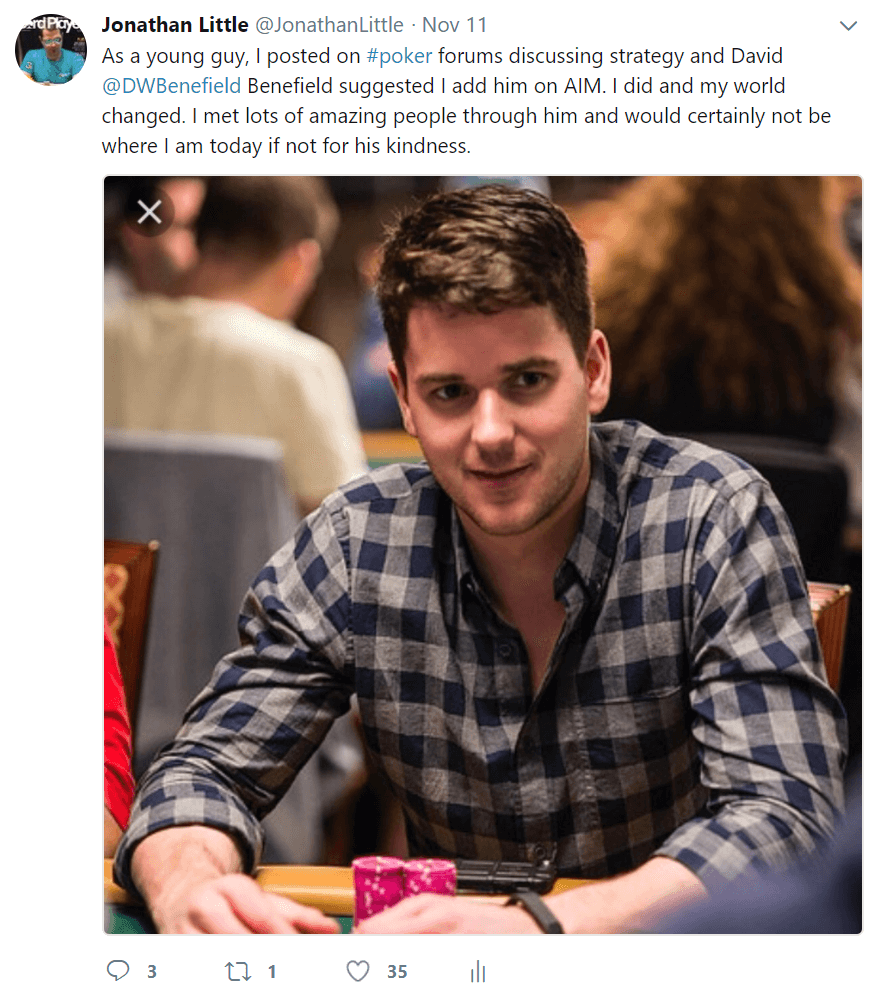 Shannon Shorr and I have traveled and roomed together a bunch over the last 10 years. Like many of my poker friends, I met Shannon in the PartyPoker sit n’ go’s. He was clearly a good player but had a propensity to berate people when they played poorly. I asked him to message me on AIM and enlightened him as to why berating weak players is a bad idea. He took kindly to it and we started talking strategy and working hard to improve together. Shannon was my best man at my wedding. He is great! 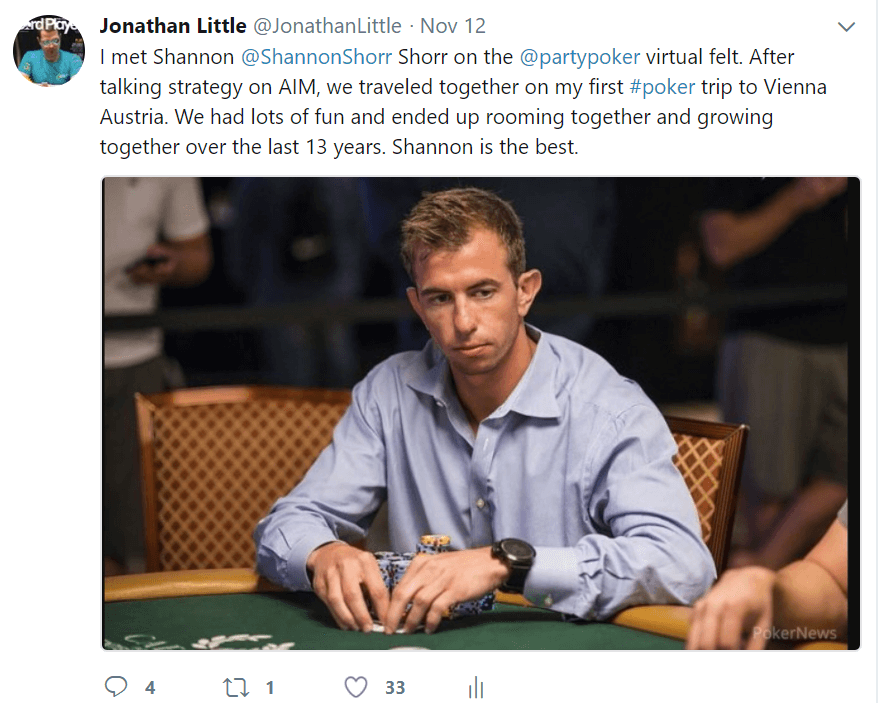 Bill Seymour was my first poker coach. I found him by searching “poker coaching” on google. Unlike almost everyone, he seemed to never get rattled at the poker table. When his opponents took a bad beat, they lost their minds. When Bill took a bad beat, he was stoic and continued playing great poker. I remember traveling to a live tournament stop with him and watched him play the $100 and $200 satellites (at which he was known to be world-class). He won almost every time! Bill plays all the game well, something that I certainly can’t do, and has stood the test of time, which is something almost no poker players can claim. He was a pioneer, opening one of the first poker training sites, PokerCoaching.com, which I eventually took over. 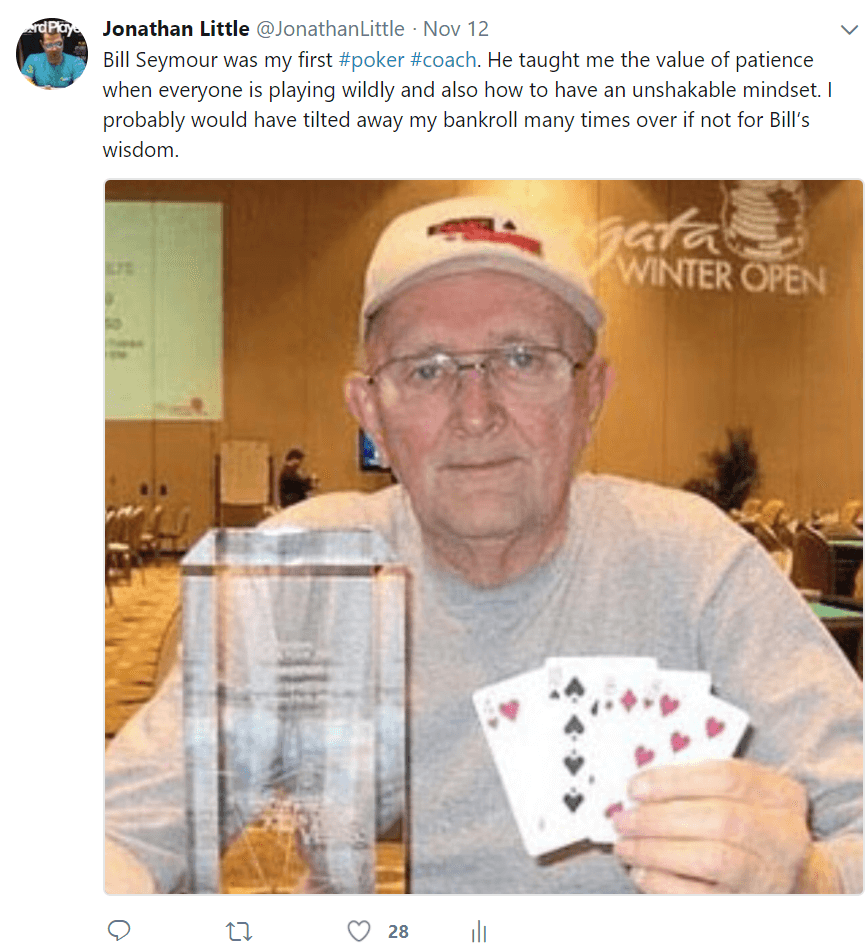 Andrew “Good2CU” Robl is another one of my friends from my sit n’ go days. He taught me to loosen up and stop being such a nit, both on and off the table. He was the first person to put the idea of physical fitness on my radar. Similar to Raptor, Good2CU seemed to be (and still is) one step ahead of everyone else. He can currently be found playing the biggest cash games in the world. He is the end boss of poker. 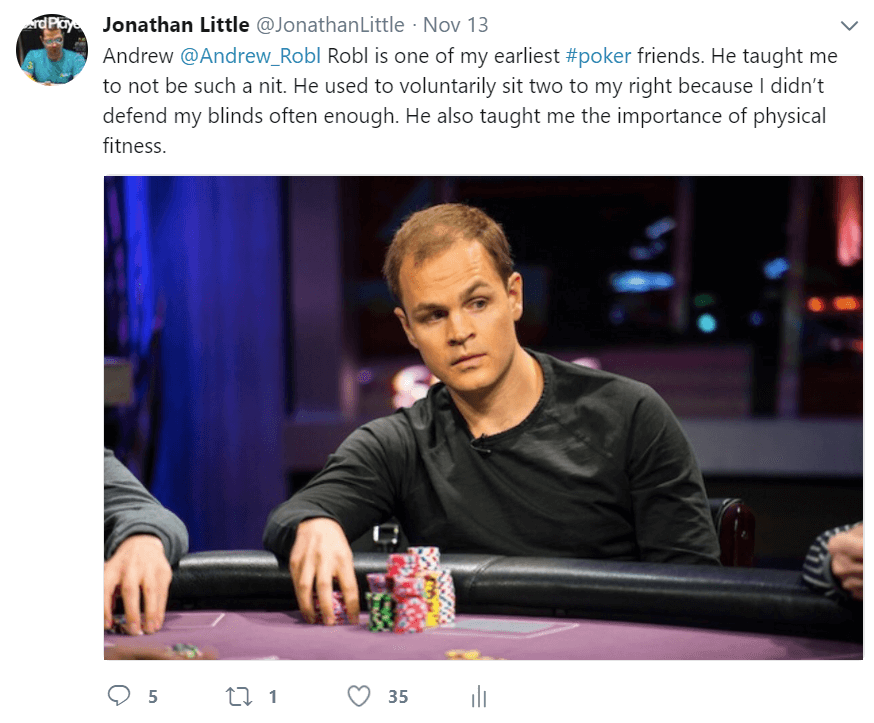 Greg “Curtains” Shahade was my second official poker coach. While I was having decent results in the $200 sit n’ go’s, I realized my edge was diminishing. It was initially winning $20 per game (10% ROI) but eventually dropped to 2%. I decided to hire a coach and found Greg, who was crushing the $100 games at some insane rate like 20% ROI. It may seem silly to hire someone who is playing lower stakes than you for lessons, but it was clear through Greg’s writing that he was one of the best and could easily beat the $200 games if he wanted to. He told me that the only reason he didn’t play the $200 games was because he didn’t want to experience gigantic swings, which is a concept I carry with me to this day. Just because you have an edge does not mean you should play. He also taught me to stop pushing all-in with A-x from early and middle position for 10 big blinds. That alone increased my ROI back to 8% and allowed me to print money for a few more years before transitioning to live tournaments when I turned 21. 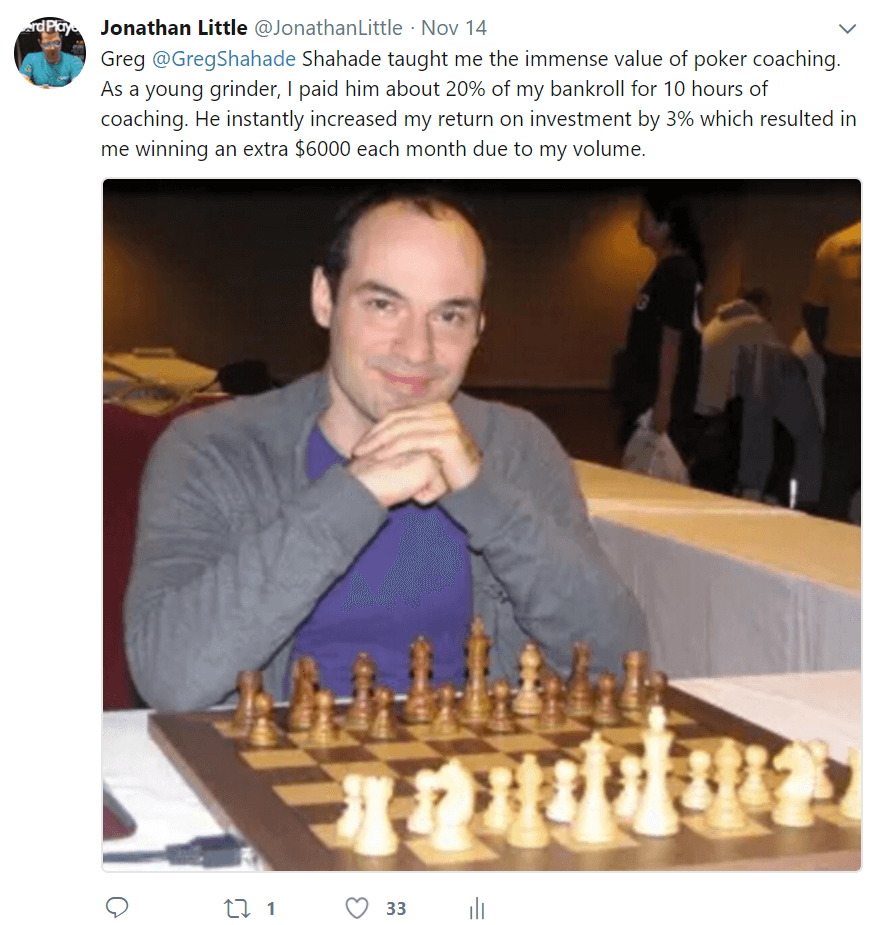 While I have never had a strategy discussion with David “the Dragon” Pham, I have learned a ton by watching him at the table. In a world where everyone played a tight, cautious game, he would reraise and run insane bluffs to his heart’s content. This occasionally sent him to the rail early, but often led to him having a mountain of chips. I realize this makes him sound like a maniac, but I have also witnessed him make some overly tight folds, including one against me deep in a WPT where he raised to 2.5 big blinds from the button, I went all-in for 14 big blinds, and he folded A-J face-up. Of course, I had K-K. Don’t mess with the Dragon! 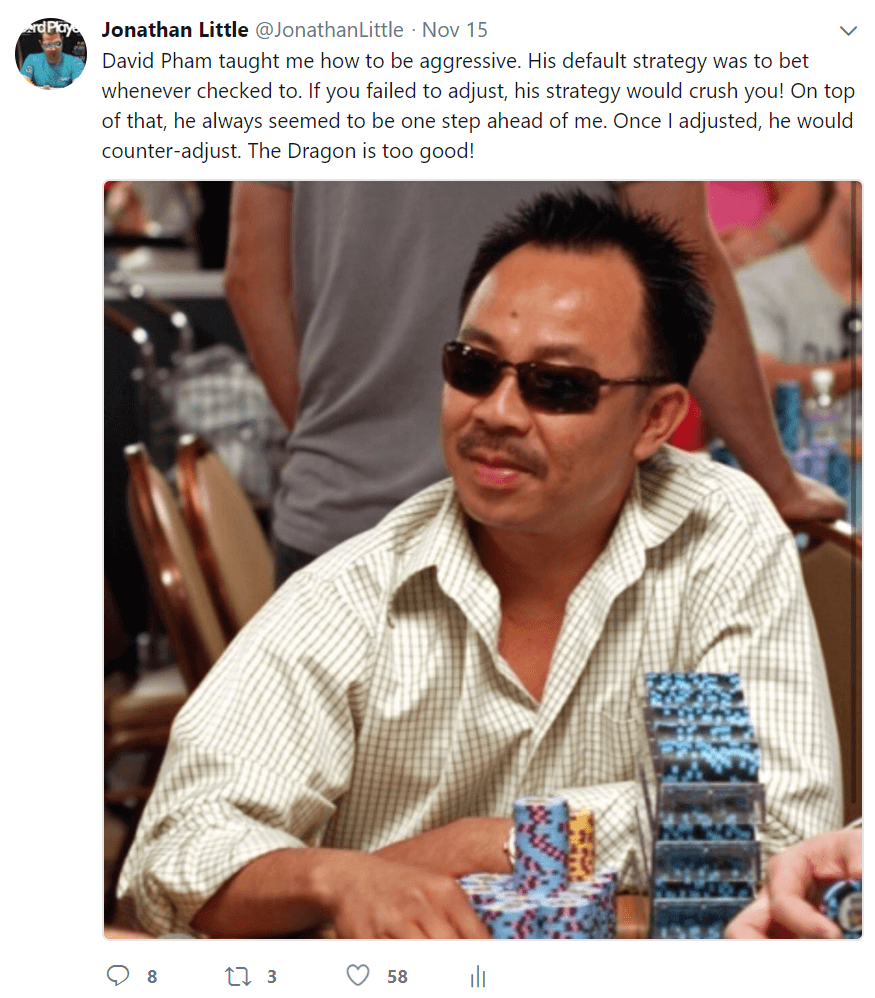 I have the utmost respect for Lee Markholt. He is truly a master of no-limit hold’em, excelling at both nosebleed cash games and high stakes tournaments. While he seems to play a decent amount of hands, he always seems to have top set at the showdown, earning him the nickname “Top Set”. Lee has taken my money many times by showing me top set (and sometimes just Ace-high). Thanks for that! Lee is my favorite poker player. 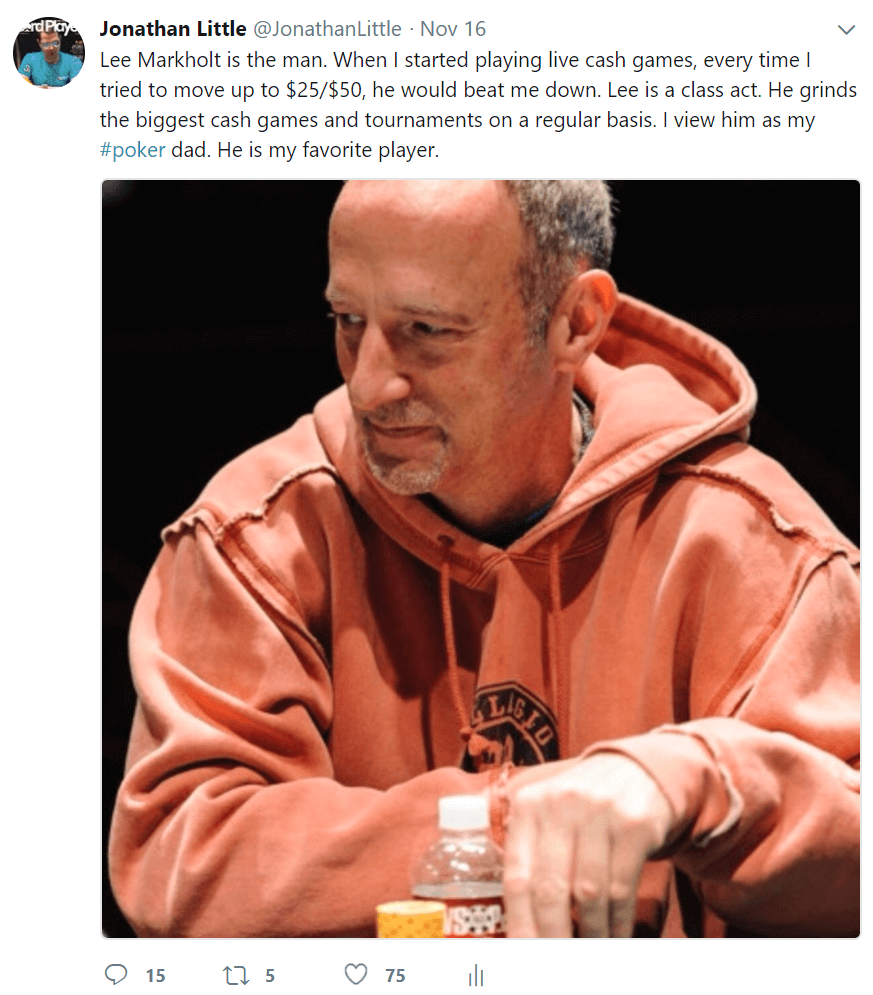 Aaron “Daliman” O’Rourke was one of the pioneers of early sit n’ go strategy. I learned a lot about sit n’ go’s, cash games, sports betting, and casino games from him. Many times, we have won and lost money together. There is something about winning and losing together that bonds people, which doesn’t happen too often in poker because it tends to be an individual game. We always seem to be on the same team though. Win or lose, I am happy to be in action with Daliman. 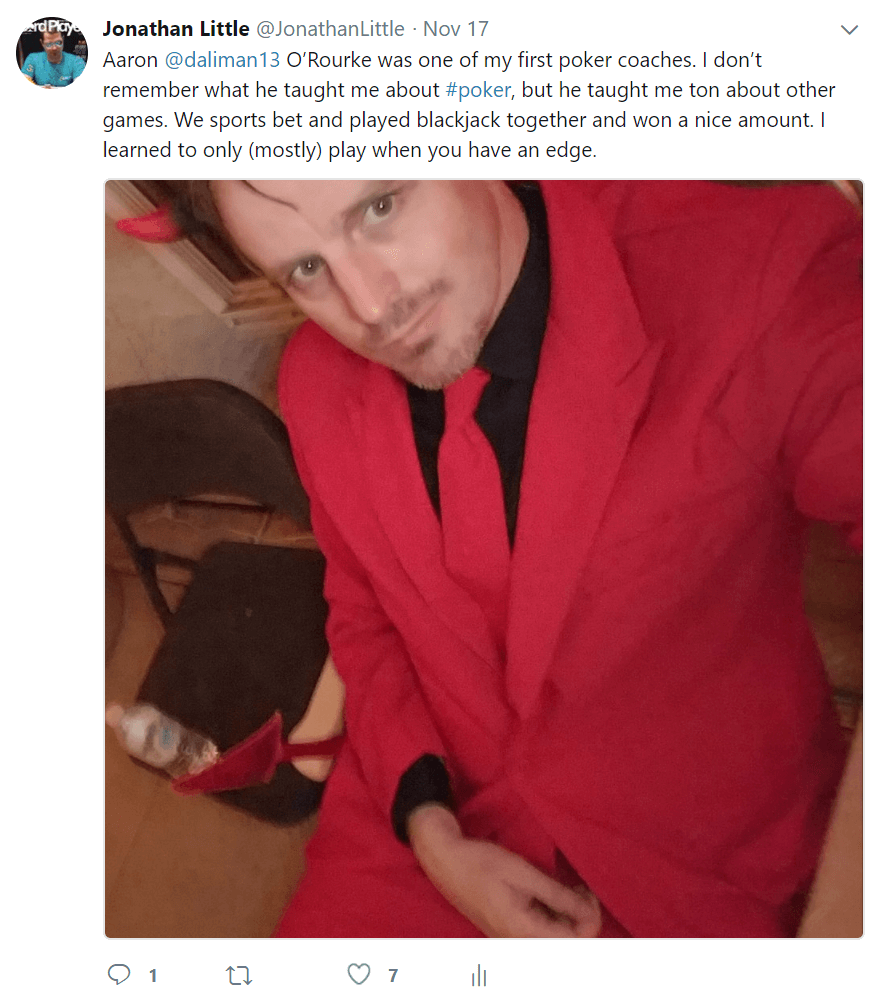 Hoyt Corkins is an awesome dude. He is my hiking buddy whenever we are both in Vegas, which at this point seems to only be during the WSOP. Hoyt taught me long before the GTO solvers to really push the aggression in spots where the opponent should have a range they cannot defend properly. As an aspiring poker player, I remember watching Hoyt push around (and get a bit lucky against) Phil Hellmuth in one of the first WPTs. It was fun to watch! 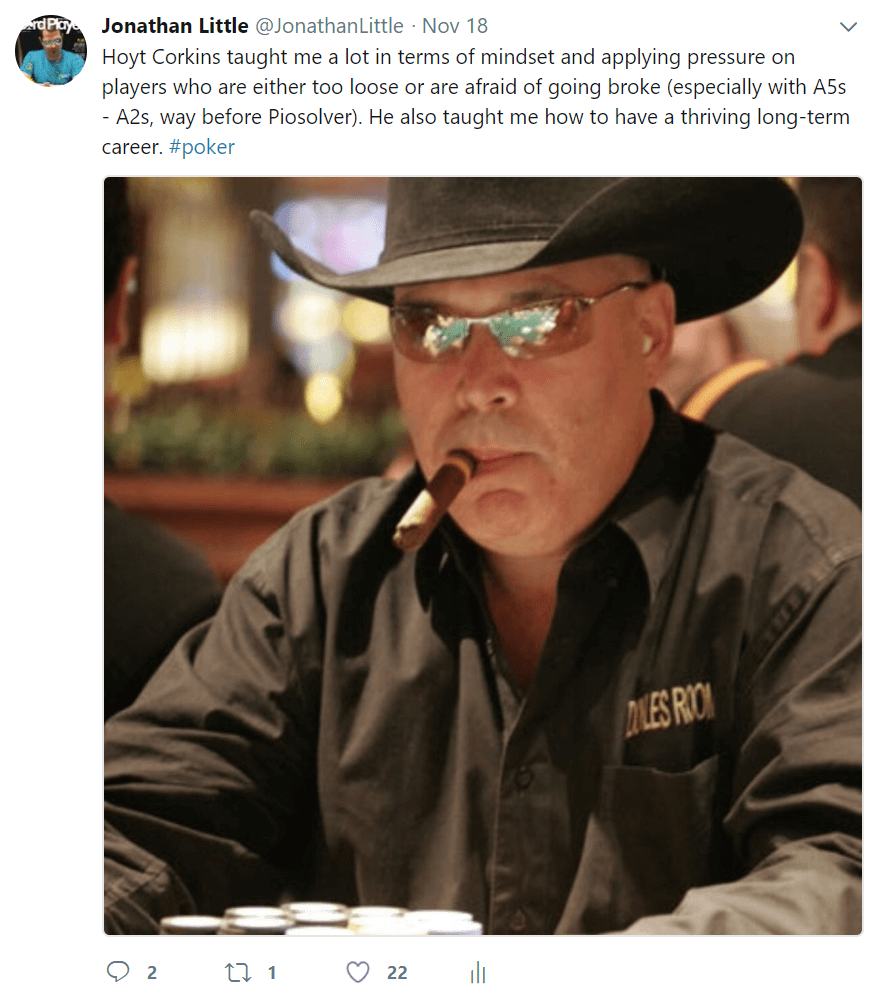 Mike Sexton is the reason many poker players play the game. He was not only the face of the WPT (the show that brought poker into our homes each and every week on the Travel Channel), he was also instrumental in making PartyPoker the most popular and trusted poker site in existence. I have hung out and played with Mike on many occasions and he is as real as they come. He is larger than life, but still down to earth and kind. We could not ask for a better poker ambassador. I can’t think of a better person to represent the game we love. 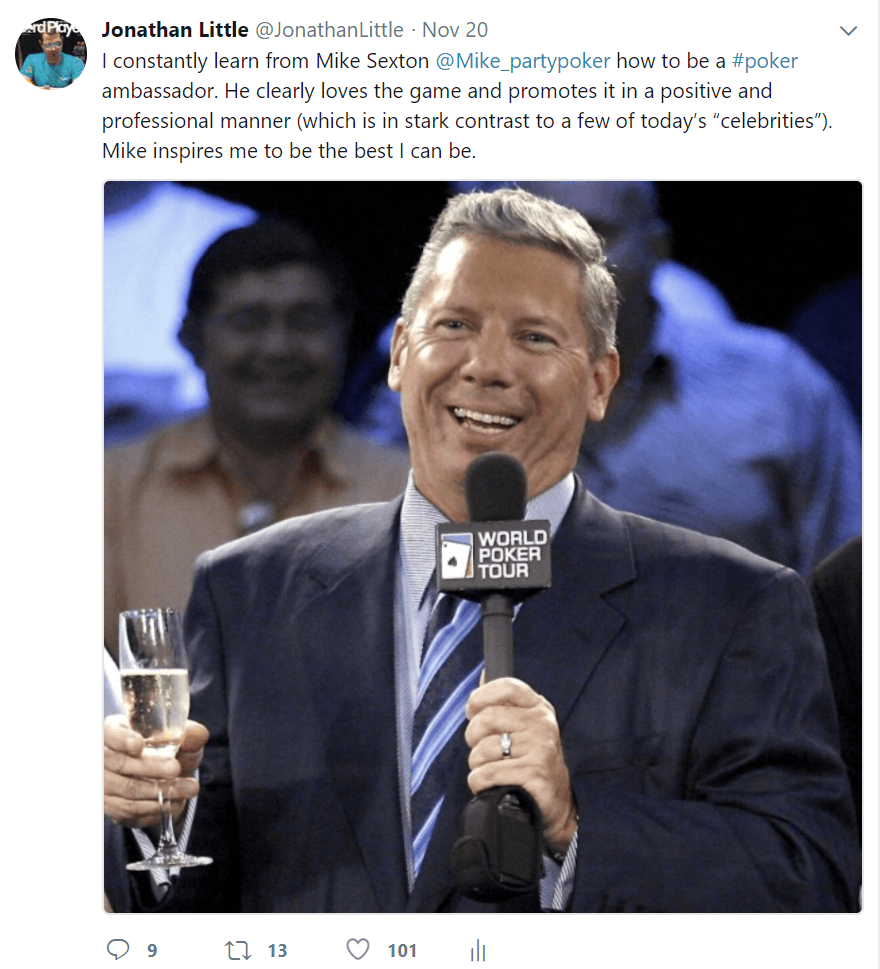 Thanks for taking the time to read this post. If you enjoyed it, please share it with your friends. Be sure to check back next week on JonathanLittlePoker.com for another educational blog post. Thanks for reading!

5 thoughts on “My 10 Most Influential Poker Players”