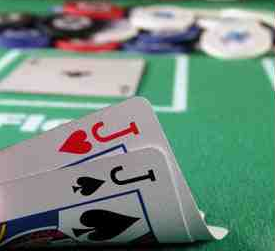 This hand illustrates the important concept you must master of how to play a decently strong over pair when your you beat most of your opponent’s range, but he could have you crushed. While it is often a great idea to value bet three times versus amateur players who will call down with a wide range that you beat, electing to pot control will ensure you do not lose your entire stack when you happen to run into the nuts. However, if you get in the habit of playing your over pairs in the same manner every time (either always betting three times or pot controlling), you will leave significant money on the table.

With only 16 players remaining at 8,000/16,000-2,000 blinds, everyone folded to me on the button. I raised to 37,000 out of my 750,000 stack with Jd-Jh.
A 45-year old player who seemed to be an experienced amateur called 21,000 more out of his 400,000 stack from the big blind. I imagine he would defend the big blind with a reasonably wide range, perhaps as wide as 70% of hands, but more likely 50% of hands. It is difficult to say whether or not he would reraise with his best hands and some bluffs, as some players almost never reraise from out of position while others frequently reraise with a wide range.

The flop came 5s-4s-4c. My opponent checked, I bet 40,000 into the 100,000 pot, and he called. When he check-calls this flop, I think I can narrow his range to nut hands, all pairs, all draws (even gutshot draws) and some random over card hands, such as Ks-Qd.

The turn was the (5s-4s-4c)-8c. My opponent checked, but he did so an abnormal way that made me think he particularly liked his hand. Especially deep in a tournament where the chips you stand to lose are worth more than the chips you stand to gain, your primary concern should be to protect your stack. Even though there are numerous draws my opponent could have, I think checking behind is a perfectly acceptable play, mainly because there are many hands my opponent could realistically have that I am drawing thin against. If my read happens to be wrong and my opponent either has a draw or an unpaired hand, he may decide to bluff the river, thinking I would almost always bet with my strong made hands. If he has a marginal value hand, such as 6-5 or 2-2, he may elect to check-call a river bet when the turn checks through. All of this led me to check behind.

Do not think that you must blindly bet every single time you have an over pair. Always analyze your opponent’s range and be willing to adjust your strategy if you make a read that leads you to believe his range is stronger than normal. Notice the alternative, likely more-standard, line in this spot would be to bet 80,000 into the 180,000 pot. If my opponent check-raised all-in, I would be in a miserable situation, especially given my read that he likes his hand. When possible, I tend to play in a manner that doesn’t lead to me folding strong hands. While you may be able to comfortably bet-fold the turn versus a weak player, you will find that most players in the high stakes games are capable of check-raising all-in as a semi-bluff, even in high pressure situations such as this one. When you are unsure how to react if your opponent applies aggression, checking is often the ideal play.

The river was the (5s-4s-4c-8c)-8d. My opponent checked. I don’t think his check says much about his range. While most players would bet their nut hands on the river, I give him enough credit to realize that my range should be quite marginal, as I would have played most under pairs and unpaired hands in the same way. This means that if my opponent bets, I will usually fold. So, if he wants to extract maximum value, he should strongly consider checking with most of his strong hands to give me the opportunity to bluff.

Even though I still thought my opponent liked his hand, I bet 125,000 into the 180,000 pot for value. Although it is important to actively focus at the table and make reads on your opponents, you must recognize that you could be wrong. Do not get into the habit of drastically altering your game plan every time you think you pick up a tell. Unless you have a large sample size of tells on your specific opponent, tells should only sway your close decisions one way or the other. In this situation, I think value betting is a clear-cut decision.

Fortunately for me, my opponent called and then mucked when I turned my hand up. While I may have missed out on stacking my opponent when he happened to have 10-10 or 9-9, I think, given my read, taking the line that leads to a medium sized pot was the right play. Unless you have an incredibly aggressive image, strong one pair hands are usually good enough to value bet twice (in this case, on the flop and the river). If you put in three bets (flop, turn and river), you will force your opponent to only continue with the best hands in his range, many of which can beat an over pair. Do not get in the habit of forcing your opponent to play well because you apply so much pressure such that he can only call when you are beat. 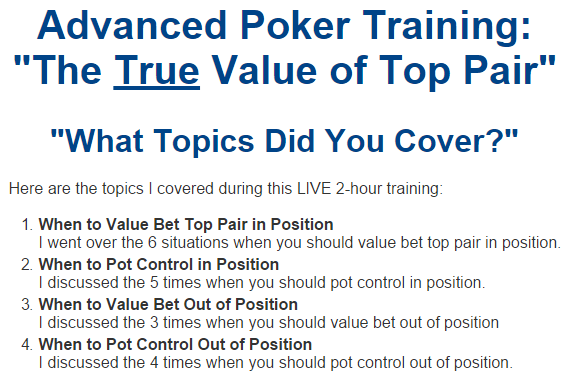 If you want to more information about how to master playing top pair, I strongly suggest you check out my advanced webinar, The True Value of Top Pair. I discuss numerous situations that will make it clear when to go for maximum value and when to pot control. If you learn to play this common situation correctly, you will see an immediate increase to your win rate. Check it out and let me know what you think on twitter @JonathanLittle. Be sure to check back next week for another educational blog post. Thanks for reading!

2 thoughts on “When to bet twice with an over pair”