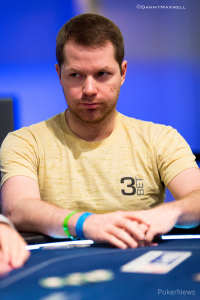 The World Series of Poker is right around the corner, so today I am going to share with you a hand from the WSOP two years ago where I managed to not go broke with the second nut full house. When you find yourself in a situation on the river (where the vast majority of amateur players play in a blatantly straightforward manner) where you face a polarizing bet, meaning your opponent either has the nuts or nothing, conserving your stack is of the utmost importance, even when you have a premium hand.

This hand was from a $1,500 buy-in event. A generally straightforward player limped from second position out of his 12,000 effective stack at 50/100. I decided to limp from 3rd position with As-7s. While raising to 400 in attempt to isolate the limper is a fine play, I am a big fan of keeping many opponents in when I have a hand that can somewhat easily make the nuts. A loose, splashy player raised to 450 from the hijack seat. Everyone folded around to me, including the initial limper, and I decided to call 350 more. When you limp with a hand that has a large amount of postflop potential, when facing a reasonably sized raise, you should tend to call and see a flop.

The flop came Ah-Qh-7c, giving me two-pair. I checked, as I do most of the time when I am out of position versus the preflop raiser, and the preflop raiser checked behind. When she checked behind on this draw-heavy high card board, I assumed she either had a hand that had a bit of showdown value that was in marginal shape if she bet and got called, such as A-2, K-K or Q-J, or nothing.

The turn was the (Ah-Qh-7c)-Ad, improving me to a full house. I bet 850 into the 1,150 pot. When you think your opponent either has a hand with showdown value (which she will never fold to any bet) or nothing (which she will always fold to any bet), you should make a fairly large bet. My opponent called, which led me to believe she had a hand with marginal showdown value such as an Ace, Queen, or middle pair.

The river was the (Ah-Qh-7c-Ad)-5c. I bet 2,300 out of my 10,700 stack into the 2,850 pot, again for value, thinking she would never fold a Queen or better. As on the turn, when you think your opponent has a hand that she will rarely fold to any reasonable bet, you should choose a large bet size.

My opponent surprised me by raising to 7,000. When facing a sizable raise on the river in a situation where you should rarely expect to get raised, given the way your opponent played the hand, alarm bells should go off in your head. Notice that it makes no sense for my opponent to raise with any marginal hand, even trip Aces, on this river, given I bet the turn and river fairly large. This means she is either turning a weak marginal hand or a busted draw into a bluff, or she has a hand she thinks is the nuts. Since I was unsure if she would raise over the limpers preflop with A-5, the only nut hand that made much sense was A-Q, or possibly Q-Q. Notice that when my opponent has one of these nut hands, she will call if I go all-in every time and if she has a bluff, she will fold. Of course, if she is raising with any Ace because she views trips as the nuts, failing to go all-in would cost me a huge amount of equity. 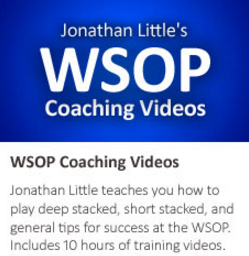 After a bit of thought I decided to call, leaving myself 3,700 just in case I happened to be against exactly the nuts, A-Q. Sure enough, she turned up A-Q. The main reason I much prefer calling to going all-in in this situation is because having 3,700 chips at 50/100 in a soft $1,500 buy-in event is quite valuable, whereas the difference between having 24,250 and 20,550 isn’t too large. Fortunately, I ran hot with my 37 big blind stack and managed to take 28th place out of 1,914 entrants for $11,420. This time, the conservative route paid off.

If you plan on attending the World Series of Poker or if you play in soft tournaments on a regular basis, I suggest you check out my 10-hour long WSOP Coaching webinar where I thoroughly explain how I have achieved my successes in these events.

Thank you for reading! Be sure to check back next week for another educational blog post.

4 thoughts on “Not going broke with a full house”