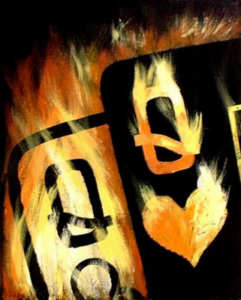 Before moving forward, it is important to put the small blind on a range of hands. Obviously this is quite difficult to do with no reads. Some players will push with a wide range containing all pairs, all suited Aces, most Broadway hands, and some suited connectors. Others will use a strategy of only pushing with their best hands, electing to call or fold with their lesser hands. A few players will push with an incredibly wide range because they think they can make their opponents fold most of the time.

In reality, the small blind’s pushing range should depend on the raiser’s and callers’ strategies. If he expects them to have tight ranges and call an all-in most of the time, he should only push for value. If he thinks they will fold most of their hands because their ranges are wide and they are not aware of their great pot odds, he should push with a wide range to take advantage of them folding too often.

After the small blind’s all-in, the initial raiser pushed all-in for his 85,000 effective stack. At this point, the player in the cutoff started grumbling about how sick of a spot it was and that he could not believe he was about to fold. The button piped in and said essentially the same thing. Of course, it should be clear that the cutoff’s table talk is completely out of line because the button was still yet to act, and the button’s reply was also out of line because the cutoff had not folded. This situation is ripe for abuse because if the cutoff grumbles and then gets a reply from the button that lets him know the button is folding, the cutoff can then call off with a slightly wider range. That said, these players were clearly both amateurs who were oblivious to this dynamic. That doesn’t make their actions acceptable, but it is worth mentioning.

They both mucked their hands face up, with the cutoff showing Q-Q and the button showing T-T. While both of these hands could easily be crushed by A-A or K-K, when you only have 20 big blinds, they are certainly worthy of getting all-in in most three-way scenarios. If the cutoff pushed all-in for his 20 big blind stack, folding the T-T in a four-way pot facing three significant all-ins would then be acceptable, but if he had Q-Q instead of T-T, he should still make the call.

Both of these players mentioned they did not want to gamble, thinking they would not win the pot more than half the time. They failed to take both their equity advantage and excellent pot odds into account.

The main fold worth discussing here is the Q-Q. When facing two all-ins from overly tight players who only push with 9-9 and better, A-K, and A-Q, Q-Q has 40% equity. While there is a side pot involved in this situation, in general, if you are putting in 33% of the money and you know you will win at least 40% of the time, you simply must be willing to hop in with your lion’s share of the equity. If the two other pushers have wider ranges including all pairs, all suited Aces, and some Broadway hands, Q-Q jumps to 52% equity. Clearly folding that situation is a gigantic blunder.

The only time folding Q-Q is anywhere near acceptable is when both players are incredibly tight, only getting in with A-A, K-K, Q-Q, and A-K, which is not realistic at all. In about 99% of games you play, you will rarely have a read that accurate. In this hand, notice that if the initial raiser who pushed all-in had a normal or wide range, even if the small blind’s 10 big blind pushing range is incredibly tight, Q-Q can still get in because it has a large amount of equity against the initial raiser’s 20 big blind all-in. All in all, folding Q-Q is a huge disaster. The cutoff’s unwillingness to “gamble” ensures he will stay stuck in the small and middle stakes games forever because this edge is way too large to pass up. If you regularly pass on significant edges, you simply will not win.

Just so you know, I would tend to call off in the cutoff’s shoes with roughly 9-9 and better, and A-K. While 9-9 could be a losing play against tight ranges, the fact that the initial raiser is a loose, aggressive player in a position to push and make the two callers who presumably do not have premium ranges fold, I think he almost certainly has a wide range.

This time, the small blind had J-J and the initial raiser had 9-9, both of which were finely played hands. The guy with Q-Q then said “I knew it!” as if he now all of a sudden knew he had the best hand but folded anyway. Don’t be that guy.

1 thought on “Do Not Be Afraid to Gamble”