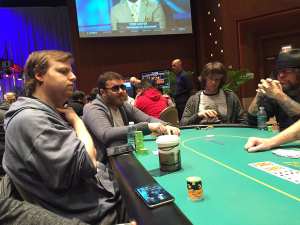 Due to the popularity of my recent blog post where I reviewed 5 hands from an EPT event, in this blog post I am going to share with you the last 5 hands I played during the final two levels of day 1a of the $3,500 buy-in World Poker Tour Borgata Winter Poker Open. I had a difficult seat, with 3-time WPT Champion Anthony Zinno and WSOP Main Event Champion Joe McKeehen on my left, but I did my best. I will give my analysis of each situation to let you know exactly why I made each play. Would you have played these hands I played them? Let me know in the comments section below.

My preflop call is speculative, but I thought the initial raiser would stack off poorly postflop whenever he has an over pair or top pair. This is a huge implied odds situation for me as long as I am disciplined enough to not lose much when I make top pair. If I thought the players in the blinds would frequently reraise, I would have folded preflop.

With middle pair and a flush draw, I can go a few different directions. I can either call the hijack’s bet intending to call the turn and fold on the river if I don’t improve. I can also turn my hand into a semi-bluff by raising, which is a good play if I think I can make my opponent fold every hand worse than an over pair, which should be almost his entire range, by the river. I thought this specific opponent would not want to stack off with top pair. I was also unsure if he would be willing to triple barrel as a bluff if I called the flop and turn, meaning I may make incorrect folds on the river if I call on the flop and turn.

When deciding how much to raise, I can either raise small, intending to triple barrel on most boards, or I can raise large, perhaps to 7,000, intending to go all-in on most turns. I think both plays are fine, but in general, I prefer lines that give me multiple streets of fold equity. Taking this line when I have premium hands also extracts additional value from marginal made hands.

On the turn, I decided to bet small because I didn’t think my opponent would fold any made hand to any bet, and I currently have all the draws in bad shape. By betting small, I don’t put my stack in drawing thin versus made hands while extracting a bit of value from worse draws. It is unfortunate that the turn severely diminishes the number of premium value hands I can have (it is now quite difficult to have 4-4) but I think barreling is still fine. Against strong opponents, you always have to be aware of your range. In this spot, my value range is quite tiny, which means I should also have relatively few bluffs in my range.

If my opponent checked to me on the river, I would have checked behind because I don’t think anyone is folding a Queen or better to any bet and I beat or chop with most other hands. When my opponent made a micro-bet, giving me amazing odds, I think calling is the only option. I am unsure if I am actually getting the proper pot odds to justify a call, but it is probably close. I considered turning my hand into a bluff, but I thought it was too likely my opponent was making a tiny bet to induce me to raise with quads or perhaps with a full house he had no intention to fold to any amount of aggression. Perhaps I should have attempted the bluff.

My preflop raise and flop continuation bet are completely standard. It is worth mentioning that I expected my opponent to fight hard for most pots on boards containing mostly middle cards. I didn’t plan to fold to any reasonable amount of flop or turn aggression. I think my opponent’s flop check-calling range is quite wide, perhaps including hands as weak as Qc-9c and 9c-8s, although he may elect to check-raise with those.

I wasn’t too surprised when my opponent led into me on the turn. I think his range is quite wide, including all his draws, strong made hands, and perhaps his marginal made hands. I decided to raise small to extract value from the draws and marginal made hands while also making it much less likely that I face a river bet, meaning I will see a cheap showdown when I happen to be beat.

If my opponent was a relatively straightforward player, I would have value bet with my rivered straight with the intention of folding if check-raised. However, since my opponent is a world-class, tricky player, I decided to check behind. Especially when your opponent will be unlikely to call a value bet with many worse made hands, if you should strongly consider checking behind on the river if you will be unsure how to react if you get check-raised.

My preflop raise is completely standard. I was a bit concerned that the small blind may have a premium range, but I knew he tends to see a flop with a wide range of hands that flop well. This made me discount premium hands from his range, although he could certainly have them (or a hand like 9-9 or A-Q that he would not fold). The big blind’s reraise looked quite strong, but I got the vibe that he was attempting to take advantage of a somewhat obvious squeeze opportunity. I had been reasonably active and was not facing much aggression. The big blind certainly had a snug image. I made the assumption that the big blind would realize he must look tight and have the courage to get out of line. While putting in 33 big blinds with 7-7 isn’t ideal, I think effectively going all-in in this situation is somewhat standard. Even when I get called, I will have a decent amount of equity versus both players’ ranges. Luckily, they folded.

While I had been somewhat active preflop, I had been completely in line preflop when it came to reraising (mostly because I didn’t have many premium hands when someone raised in front of me). I decided this was a decent opportunity to get a little out of line and apply pressure to a loose aggressive kid who seemed to be raising more than his fair share. I used a small preflop reraise sizing to hopefully make him think my range was abnormally strong, although that assumption is somewhat optimistic.

On the flop, I decided to make a small bet, again representing an abnormally strong range. In general, on somewhat dry boards, the preflop reraiser should bet small because most of the time, the caller has a much weaker range than the reraiser. This means that, on average, the reraiser should not mind giving the caller great odds because the caller will frequently be crushed. It should be made clear that I would play all of my hands in this exact manner in this spot.

I decided to ramp up my bet size on the turn to hopefully make my opponent fold everything besides top pair and draws. If he called my turn bet, I was going to be done with the hand unless the river was a non-heart over card (those cards should be excellent for my range and bad for my opponent’s range, making them somewhat mandatory bluffs).

When I improved to middle pair on the river, I assumed I had the worst hand most of the time (I lose to all flushes and top pairs). However, since I beat a few under pairs and a few straight draws, I decided to check. I don’t think betting as a bluff has any merit because it is too likely my opponent has a flush or top pair that he will call with every time.

All in all, I got owned on this hand.

I think my preflop raise is fine. I thought if I raised larger, perhaps to 1,600, both the short stacks in the blinds would be much more inclined to reraise or fold. Since I had a hand that flops reasonably well, I would much prefer my opponents call or fold, compared to reraise or fold. However, once I pick a bet size in this scenario, I tend to stick with it for a while. I do not think it is a good idea to vary your bet size based on your hand’s strength, especially against excellent opponents.

I decided to check behind on the flop because I have nothing. I also got the vibe that the small blind liked his hand. Facing a reasonable bet on the turn, I decided to call due to the roughly break-even pot odds plus implied odds. I don’t think raising has much merit because it is too likely that the short stacks will call off with any top pair hand that has me drawing thin.

On the river facing a substantial bet, I assumed the big blind had a strong hand most of the time as bluffing into two players who could easily have a flush is not a good idea. Facing a player who made a large bet and a player whose check doesn’t say much about his hand’s strength, it is simply too likely that one of my two opponents has me beat. The small blind called fairly quickly, which makes me think he must have had at least two pair. This was a fun hand! 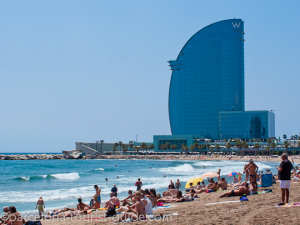 I hope you enjoyed this blog post. If you want more training content like this, I suggest you check out my exclusive webinar where I review every significant hand I played that led to me taking 7th place out of 512 players in a recent European Poker Tour side event for €29,000.

Please let me know what you think about this type of blog post in the comments section or on twitter @JonathanLittle. Be sure to check back next week for another educational blog post. If you want to help me out, please tell your friends about my blog! Thanks for reading and good luck in your games!