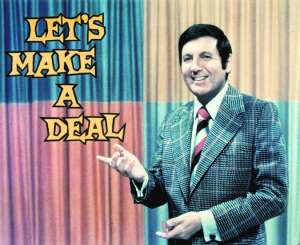 This blog post is small part of my extensive chapter on Final Table play from my upcoming book, Excelling at No Limit Hold’em. I hope you enjoy it.

Whenever only a few players remain at a final table, it is not uncommon for someone to propose a deal. When a deal is made, players usually get some amount of cash based on their current chip stacks. In general, making a deal is not a good idea unless you are getting significantly more money than you should, based on an ICM chop. To determine the value of your stack, simply use one of the various ICM calculators online in order to determine the value of each stack. In this section, I will discuss why making a deal is not a good idea if you want to develop into a resilient poker player.

Before we move forward, I want to make it perfectly clear that you should feel no obligation to make a deal with your opponents, even if it is the “customary” thing to do at your local casino. When everyone signed up to the tournament, they agreed to the payout structure set by the tournament director. Also, there is nothing unethical about using superior knowledge of math and deal structures to present a deal that is better for you than your opponents. You do not have to present or accept deals that are “fair” in a traditional sense. In fact, you should almost never accept a deal where you are not getting some sort of edge. If your opponents desperately want to make a deal, make them pay you for that privilege.

The main reason why you should not make a deal is because you need to get experience playing for extremely high stakes if you want to succeed at tournaments in the long term. It is not uncommon for small stakes players to chop every time they make it to the final table. When they eventually move up, when they make a middle or high stakes final table, they are often shocked to find out that no one even entertains a deal. The small stakes player is now forced to play short-handed and heads-up versus opponents who have significantly more experience. This gives the experienced players a huge advantage. In order to gain experience playing for high stakes with very few players at the table, you simply must practice. You get real-world practice by not making deals. If you constantly make deals with your opponents, you will never get this experience.

You will find that the equity difference between 1st and 2nd place money in small stakes tournaments is relatively insignificant in the long run whereas the equity difference in high stakes tournaments can be huge. For example, when playing in a local $100 tournament, perhaps 1st place is $1,000 and 2nd place is $600. You are only playing for $400. In a high stakes tournament, the difference can be in the $100,000 range or more. It is certainly worth gambling a bit when you are playing the small stakes games in order to get experience so you are not completely outmatched when you are fortunate enough to get to play for life-changing money.

The main time you should chop is when the difference between the current payout and 1st place is legitimately life-changing money. Personally, I would not chop for this reason because no amount of money that I could win from a poker tournament, even if it was the WSOP Main Event, would change my life in any meaningful way. If you are playing for money that means a lot to you, you are almost certainly playing too large, meaning you made an error by entering the tournament. If you want to succeed at tournament poker, you must embrace variance.

You should also consider making an even deal when your opponents are significantly better than you. If you know your opponents are strong, high stakes professionals and you have never played short-handed or heads-up in your life, you should probably try to make an even deal. You will find that most professionals will not accept your deal, meaning you will have to play.

The final time you should make a deal is when you can negotiate terms that are significantly better for you than your opponents, based on an ICM chop. There are numerous ways to barter in such a way that allows you to get a much better deal than you should.

As you can see, the Chip Chop method significantly favors the large stacks. For this reason, when you have a large stack, you should often suggest that you use this method to chop the payouts. That being said, most players are catching onto the fact that this method is not the “correct” way to split the pot.

When you have a short stack, you should try to offer a deal referred to as a “Save”. A Save is when the players all take an equal amount of money off the table and play for the rest. For example, suppose you are heads-up with 5,000 chips compared to your opponent’s 10,000 chips. First place is $750,000 and 2nd place is $400,000. When you are playing heads-up, ICM no longer applies because you are effectively playing a heads-up match for the difference between 1st and 2nd place money.

The interesting thing to note about Saves is that most amateur players think they are a great idea, regardless of their stack size. They seem to love locking in a solid win and are not aware that when you adjust the payouts, you alter each player’s equity.

As a brief aside, in single table satellites, players often make Saves when only a few players remain, usually taking back their buy-in and playing for the rest. When you have the largest stack, avoid making Saves at all costs because they demolish your equity.

I have only chopped a few times in my life and I want to share the circumstances with you. The first time I made a significant chop was in the Sunday Million online. I was 4th in chips with four players remaining. I don’t remember the exact chip stacks, but I had a decent amount less than the player who was 3rd in chips. I firmly demanded that I would only make a deal if I got as much as the player who was 3rd in chips. They agreed and handed me $10,000 more than the ICM numbers indicated.

Another time I chopped was in a $3,000 tournament at the Bellagio. I was heads-up early in my career against a world class player. I had around 30% of the chips. We were playing for a difference of about $140,000, which was not too significant for me at the time. My opponent agreed to do an even chip chop, which was perfectly fair, but since $25,500 of the prize pool was in the form of a World Poker Tour main event seat, he agreed to give me half of that. Seeing how I only owned around 30% of that $25,500 seat, I happily took the deal and pocketed $5,100 in equity.

I once chopped a small $1,000 tournament when four players remained. I had 15% of the chips in play. The chip leader really wanted to take home the trophy. He agreed to give everyone an even chop with 25% of the remaining prize pool each, if we would give him the trophy. We all happily agreed.

Finally, I recently chopped a $5,000 buy-in turbo event. I got heads-up with around 40% of the chips in play against an excellent online player who, at his peak, was ranked 9th in the world. We both had to play the main event of the tournament series the next day and it was already midnight. In order to simply go to sleep and avoid an effectively neutral flip, we decided to make a fair deal and call it a night. We ran one hand all-in blind to see who would get the trophy. His J♠-6♣ beat my Q♦-9♦. If I didn’t have to play the main event the next day, I would have certainly played, but since I know sleep is important to me, I made the deal.

I hope you have learned a bit about deal-making. When in doubt, especially if you think your opponent is trying to get the best of you but you don’t quite understand how, simply do not make a deal and play out the tournament. More often than not, the experience you gain will be well worth the potential fluctuations of your bankroll.

I hope you enjoyed this piece from Excelling at No-Limit Hold’em. I cannot express how excited I am for this book to be released. It has taken a ton of work but I am thrilled with the finished product. Thank you for inspiring me to make it happen. You can order it here. If you enjoyed this post, please share it with your friends on Twitter and Facebook. Good luck in your games!