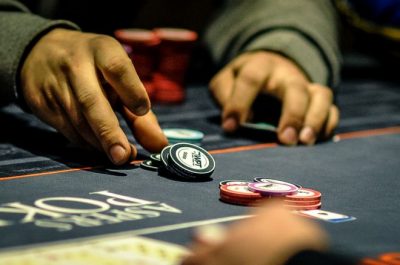 I recently witnessed a hand in a $1,000 buy-in poker tournament that illustrates a few mistakes that many amateurs make on a regular basis. With blinds at 300/600, the amateur called (limped) with a 33,000 stack from first position at a nine-handed table with Ad-Th. While A-T may seem like a decent hand because it contains two big cards, you are certainly better off folding it from early position because if you either limp or raise and face any amount of aggression, you could easily be dominated. If you decide to play it, you should usually raise in order to have some chance to steal the blinds before the flop and to also have the ability to drive the action after the flop.

The player in second position, who seemed to play reasonably, raised to 2,200. Only the amateur called.

At this point, I folding may be the best play. If you think about which hands a player in second position should raise over a first position limp, you will see that the vast majority of the raiser’s range dominates the amateur’s range. Playing dominated hands from out of position in a raised pot is asking for trouble.

I am generally not a fan of having a leading strategy, especially when the flop should be excellent for the preflop raiser. The flop should be better for the preflop raiser because the raiser should have all of the best Aces and big pairs in his range whereas the amateur should only have perhaps 8-8 and A-T, and even then, 8-8 should be raised before the flop and A-To should be folded. That said, the amateur limped something, so perhaps he could have both 8-8 and A-T in his preflop limping.

If you decided to lead the flop, betting the turn is probably fine. It is somewhat difficult to get called by K-K and Q-Q, but A-K and A-Q will never fold. When trying to extract value, it is important to figure out which hands can realistically call. If your opponent’s marginal hands (such as K-K and Q-Q in this situation) will fold to any additional bet on the turn or river, you should ignore those and instead focus on getting maximum value from the next best hands (the top pairs), which will probably call a larger bet than 5,500. So, I would have bet about 7,000, which would have left the amateur with a nice remaining stack of 22,300 with the pot being 24,300. Especially when you are primarily value betting, when you can bet a bit more on the turn such that you have a remaining stack size that is a bit less than the size of the pot going to the river, you should. By betting a bit larger on the turn, you stand a better chance of an additional bet getting called on the river.
The player in second position called the 5,500 bet. The river was the (As-Td-8c-Jc)-Ts, improving the amateur to a full house. The amateur pushed all-in for 23,800 into the 21,300 pot.

Given the opponent’s range is almost entirely marginal made hands that are worse than the amateur’s, the amateur should bet because if he checks, his opponent will often check behind with the majority of his marginal made hands, which would be a disaster. When determining how much to bet, you should usually choose an amount that can get called by most of your opponent’s made hand range. So, how much will A-K and A-Q call? Some players will only call a small bet, fearing they are beat, whereas other players will call any bet because they are simply incapable of folding top pair with a premium kicker. While it is nearly impossible for the amateur to be bluffing in this situation, I think going all-in makes the most sense versus a generic player in a $1,000 buy-in tournament.

Unfortunately, the opponent thought for a while before folding A-K face-up. We are left to wonder if the amateur would have doubled up if he simply did not lead the flop.

2 thoughts on “Leading Usually Does Not Make Sense”