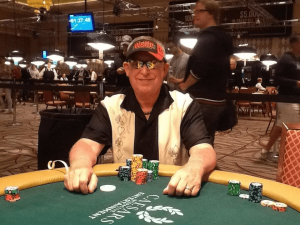 For those of you who don’t know me, I am a 68-year old amateur part-time tournament player.  I began playing tournament poker in earnest in the 1990’s and even though my family life and full time job as a lawyer left me time to play only a dozen tournaments a year, I had just begun to enjoy some modest success when the internet poker boom hit.

As the number of players exploded, and the ranks of tournament players swelled with online wizards like Jonathan whose styles of play were clearly superior to the self-taught “by the book” style of play I had learned from the old guard, I realized that I had to do something to adapt.  Fortunately I found my way to Jonathan.  With the help of his coaching I totally revamped my game, and have managed to remain somewhat competitive despite the ravages of advancing age.

Nonetheless, my priorities still remain my wife, my children, my grandchildren and my clients.  Poker is a recreational hobby.  While the main attraction for me is the competition across the green felt, part of what I enjoy about tournament poker is the dramatic difference between the colorful people and unpredictable events I experience in poker as compared with those I encounter in my life as a buttoned down lawyer.

Two examples from the 2014 World Series of Poker may seem like everyday occurrences to poker players, but I assure you things like this never happen in law firm conference rooms.

On Day 2 of the Main Event, the following rather embarrassing situation arose.

Reading physical tells is not one of the strengths of my game.  I am wrong as often as I am right.  Hence I don’t usually rely on tells when I make big decisions for a lot of chips.  But I know that a lot of players do.  So I have worked at controlling my own unconscious tells, and sometimes I employ false tells when I have a big hand and want someone to think I am bluffing.

To control my tells, I have adopted a standard series of movements whenever I bet.  I pick up my chips in the same manner each time, move them forward in the same manner and at the same speed each time, bring my hands back the same way each time, and adopt the same relaxed, restful pose each time (with my chin resting on one fist and the other arm resting on the table).  I can stay in that position for many minutes without getting uncomfortable, no matter how stressed and nervous I am inside.

I wear mirrored sunglasses (Blue Sharks of course) to hide my eyes, in case I am blinking faster than usual from nervousness or in case I need to close them in order to relax.  I pick a small spot on the table in front of me, focus on that single spot, and begin meditation-style deep breathing in order to control my pulse and respiration rate.  I do breathing exercises at home daily, and by now I can maintain that deep breathing without moving a muscle for 5 minutes or more.  Most important, I do all of this EVERY time I make a bet, large or small, strong or weak, bluff or not.  So my opponents can’t correlate it to a particular type of situation.

Against weak and unskilled opponents none of this is necessary, and I don’t bother with some of it (like the sunglasses). But when I am up against strong opponents, I need to use it all.

A few hours into Day 2 one of the players to my left was eliminated and another player was moved into the vacant seat.  I recognized him immediately as “Mad Marvin” Rettenmaier, a young German pro who had been tearing up the tournament circuit during the previous 18 months. 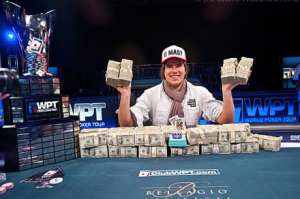 My intention was to try to avoid playing pots against him, especially since he was on my left and would have position on me most of the time.  But I was so card dead that I had very little choice about whom to play against.  The few times I picked up a playable hand I had to play it, regardless of who else was in the pot.  And because he had a huge stack of chips, and was clearly the best player at the table, Marvin was playing  almost every hand, figuring (correctly) that no one would relish taking him on unless they had a really strong hand.  Since strong hands don’t come along that often, he picked up pot after pot by betting relentlessly and getting people to fold.  When someone played back at him, he either folded or re-raised and put them to the test.

At one point, after folding junk hands for an hour and watching my stack dwindle as I paid the blinds and antes patiently waiting for a good hand, I finally picked up A-Q.  I raised.  Marvin re-raised.  Did he really have a better hand, or was he just testing the conservative amateur player with a small stack who probably would not want to risk busting out unless he had a really strong hand?

I decided the latter was at least as likely as the former, so I made a sizeable re-raise, putting nearly half my stack at risk.  Given my cautious, conservative table image, I figured he would have to give me credit for A-A, K-K or A-K and would not call unless he had A-A or K-K – a small portion of the total range of hands with which he might 3-bet.

I adopted my standard statue pose, stared at the spot in front of me, and started deep breathing and counting down from 100.  I couldn’t secretly look as him as he was to my left and I would have had to turn my head.  I was not going to give him ANY information to help him figure out whether I had the hand I was representing or was bluffing.

It felt like the game you played with your friends as a kid, where you would stare at each other silently and whoever broke first and started giggling lost.  I was determined not to let him break me no matter how long he stalled.  I was prepared to sit there deep breathing all day if I had to.

Eventually, after what someone later claimed was 14 minutes, the dealer said “The action is on you Sir”.  Well, he wasn’t calling 30-year old Marvin “Sir”.  He had to mean me.  I looked up and the whole table was looking at me.

It turned out that Marvin had slid a big stack of 5,000 chips forward (silently) after only about a minute of thought, and the rest of the time everyone was waiting for me to act on his re-raise!  Needless to say I was embarrassed.  I apologized to everyone, and told them I had no idea he had acted, that I was waiting for him to make a decision about whether to call my raise.  In the end I folded and he showed me Q-Q.

It was a great play on his part, which is why you don’t try to put a play on a world class player like Marvin if you have any sense.  It was actually a decent play on my part in the abstract (in my opinion) and was calculated to succeed against everyone except either a bad player (who is not skillful enough to fold a strong hand like Q-Q in the face of information indicating the hand is beaten) or a great player (like Marvin).  He later told me he did consider folding.  (At least I made him think about it.)

Needless the say, I got teased the rest of the day.  Every time it was my turn to act, someone would say something like “Wake up Ken, action is on you”.  One guy said “I couldn’t decide whether you were asleep or had had a heart attack”.  It was all in good fun but it was embarrassing nonetheless.  Next time I will show him A-A and double up at his expense!
The other entertaining encounter I had was in the $1,000 No Limit Holdem event a week before the Main Event.

I was in seat 7 and at one point the player in seat 9 was eliminated. After a while the empty seat was filled by a player who arrived draped in a colorful flag of a country I didn’t recognize.

The World Cup soccer matches were being shown on giant screens throughout the huge ballroom in which the tournament was held, so it wasn’t unusual to see players decked out in gear reflecting the country they supported.

I asked him what flag he was wearing, and it became apparent that his English wasn’t good enough to understand what I was asking.  Since my Spanish was equally deficient, I turned to the player in seat 10, who was from Colombia and whose English was quite good, and asked him to help.  He inquired of Seat 9 in Spanish, and then informed me that Seat 9 was from Uruguay. 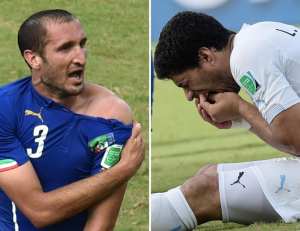 Uruguay’s soccer team had made headlines earlier in the week during a match against Italy, when one of Uruguay’s players bit an opposing player during a heated on-field encounter.

So I opened up my iPad, fired up Google Translate, set it for English to Spanish, and typed in “If I beat you in a poker hand, please don’t bite me.”  Immediately in the window below, the words popped up “Si te gano en una mano de poquer por favor no me muerda.”  I handed the iPad to Seat 9.  He read the Spanish, looked at me, and (drum roll….) laughed his head off.  We fist bumped and moved on.
Thank you Jonathan, for inviting me to share a few of my “tales from the felt”.  Any time you want more, just let me know.  I have lots of them stored up from the past 25 years.