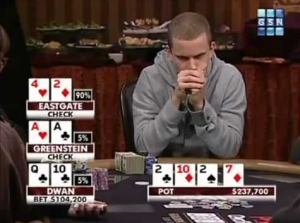 This blog post will be a bit longer and more technical than normal but I promise, the payoff is worth it as this concept alone could easily take your game to the next level if you have the leak I am about to address.

I was recently having a discussion about whether it is better to try to get heads up with A-A or to try to keep opponents in the pot.

In the hand that was posted, everyone had about 10,000 chips at 200/400. Someone from middle position raised to 1,000, someone else called, and the action folded to the Hero in the small blind, who had A-A. His realistic options were to call; reraise fairly small, perhaps to around 2,800, hopefully inducing both of his opponents to call; reraise to around 3,600, likely only getting one caller; or go all-in, usually winning the pot with no contest. If you don’t like math, skip to the end of this article for the results. However, math is important in poker. If you want to be good at poker, learn to understand the basic math.

Calling is a fun play, as it disguises the strength of your hand.  But reraising is usually a better option when you can be fairly confident that a reasonably sized reraise will keep your opponents in the pot. By calling, you make it impossible for your opponents to make preflop mistakes, as they don’t have to call any additional bets, and you also set yourself up to be in the occasional tricky situation when you check the flop, the initial raiser bets and the other player either calls or raises. Despite this, I think calling certainly has some merit but its exact profitability is difficult to calculate without knowing too much about the specific opposition, so I will ignore this option.

Reraising small, to about 2,800, will usually result in both opponents calling due to their attractive pot odds. You will find that very few people put in 1,000 chips and then fold for only 1,800 more. Assuming both players call, the pot will contain roughly 8,800 chips with remaining stacks of around 7,200. On the flop, each of your opponents will flop something good enough to continue with roughly 30% of the time, meaning that roughly 50% of the time ((% misses)(% misses) = .49) one of your two opponents will flop something good enough to continue with. When an opponent “hits”, you will have roughly 65% equity with your A-A. Of course, you will have slightly less equity on draw heavy boards and slightly more on dry boards, but I am working with rough estimates.

To figure out the rough equity of this play, you simply multiply the percentage that each situation occurs, which is:

It is worth mentioning that I am disregarding the rare times both opponents flop well enough to continue.

When you elect to raise larger, to 3,600, you have a similar calculation except you will usually only be against one opponent, meaning he will flop something good enough to continue with around 30% of the time, meaning you will win the pot with a continuation bet 70% of the time, giving the equation:

If you elect to go all-in before the flop, the amount of time you get called depends greatly on your opponents’ opening and calling ranges. For simplicity, let’s assume the initial raiser is raising 28% of hands and will call your all-in with 6% of hands. You will have roughly 85% equity against his calling range. The player who called preflop will rarely call your all-in as he would probably reraise with his premium holdings before the flop, so I will ignore him. This means you will win the pot with no contest around 80% of the time when everyone folds and you will get called around 20% of the time. This gives the equation of:

Of course, if the initial raiser opens a tighter or looser range, you should adjust the numbers accordingly. For example, if you know he is only raising 5% of hands and you know he will call every time, going all-in preflop would then show a 8,190 profit, and if he happens to fold every time, it will only show a 2,600 profit.

So, what does all of this mean? Especially with A-A, and with all hands that stand to be ahead most of the time, you are much better off keeping your opponents in the pot than you are forcing them out. By reraising large, you cost yourself 2.5 big blinds compared to when you reraise small, assuming reraising large frequently results in a heads up pot and reraising small frequently results in a three way pot. Going all-in, forcing everyone out, is usually much worse than keeping someone in unless you know the initial raiser opens with a very tight range. Most amateur players have been mistakenly led to believe that when they have the best hand, they should raise large, hoping to force their opponents out of the pot. In reality, the exact opposite is true. You make money by getting value, not throwing it in the trash.

While 2.5 big blinds may not sound like a big deal, you have to realize that world class players expect to win around 10 big blinds per 100 hands. Since you get A-A once every 221 hands, if you always try to get heads up instead of trying to keep the pot multiway, you lose around 1.2 big blinds from your win rate just from this one blunder alone. Also notice if you make this blunder, you likely do the same thing with K-K, Q-Q, J-J, and A-K, all costing you some amount of equity. I imagine this error alone keeps many small stakes players stuck in the small stakes games. They are probably only winning at around 4 big blinds per 100 hands, meaning they break even after the rake. Due to this one leak, they become losers.

I firmly believe that the reason most amateur players are so afraid of seeing a flop with A-A is because they despise getting outdrawn. They would much rather throw lots of equity in the garbage than get outdrawn some small percentage of the time. The real issue most people have is they associate losing with bad feelings and winning with good feelings. If you want to be a winning games player against people who are also trying to win, you have to associate maximizing equity with good feelings and losing equity with bad feelings. That being said, I try to have no feelings at the table. I instead record my hands and go through the “feeling” process away from the table when I review my play. The actual result of a hand, win or lose, must be totally irrelevant in your mind.

The real question is whether it is worth destroying your chance to win at poker just to avoid getting stacked from time to time when you have a premium hand. Personally, I would rather win at poker even if it means a few extra “feel bad” moments.

If you to learn more about my live cash game strategy that has allowed me to consistently win at the middle and high stakes games over the last 10 years, I strongly suggest you check out this exclusive webinar. In it, I discuss 3 key concepts you must master to win at cash games, how to crush typical opponents you will encounter, and many other vital ideas. If you diligently study this exclusive webinar, you will likely be the best player in any cash game you play.

Be sure to check back next week for another educational blog post!

9 thoughts on “Force them out of keep them in?”