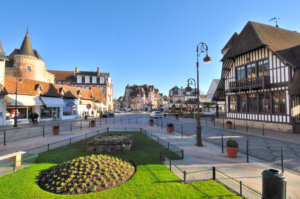 Last year I had the pleasure of traveling to Deauville, France to play the European Poker Tour series. Deauville is a beautiful city that looks like it is straight out of Disney’s Beauty and the Beast. Fortunately I made a deep run in the €10,000 buy-in high-roller event, which is always nice. I had a huge opportunity to do well in the event but I lost a few coin-flip situations as soon as we got in the money, killing my chances.

The flop came As-Ks-5c, giving me top pair with a weak kicker.

The Russian checked and I checked as well. On boards that should be good for the preflop raiser and bad for the players in the blinds, you should tend to check with your entire range to see what develops. If the kid bet and the Russian called, I would make an easy fold with my weak top pair.

Instead, the kid bet 6,800 and the Russian folded. While I am not in love with my hand, I think it is simply too strong to fold at this point, given the action. If you find yourself folding top pair to only one continuation bet, you are playing too tight. I called.

The turn was the (As-Ks-5c)-Ad, improving me to trips with a bad kicker.

I again checked to my opponent. While it may appear that betting both for value and protection is a good idea, you will find that when your opponent has you beat, he will almost certainly double up, which would be a disaster for me. By checking, you force the kid to stay in the pot with his entire range, which should result in him bluffing some percentage of the time. If your opponent checked behind on the turn, you should likely value bet the river, hoping to get called by a King or a marginal pocket pair.

My plan when my opponent continues betting is almost always going to be to just call. This is another scenario where if you raise, your opponent will almost certainly play perfectly, calling when he has you beat and folding when he doesn’t. While the kid usually has some number of outs, it is worth it to let him draw to them in exchange for not opening yourself up to doubling him up when he has the nuts. So, I called.

I again checked for the same reasons as on the turn.

At this point, even though I have trips, my hand is purely a bluff catcher. If my opponent was a tight, passive player, I think this is an excellent spot to fold. However, since my opponent is a loose, aggressive kid, I think that I have to make the hero call. Having an Ace blocker is powerful because it takes many of the value betting combinations out of my opponent’s range. If I had a slightly worse bluff catcher, such as K-Q, I would probably fold because then it would be too likely that my opponent has an Ace.

I made the call and was pleased to see my opponent muck his cards, awarding me the pot. I have no clue if he was bluffing with a flush draw or if he had something much worse, such as Q-T or 8-7. Either way, if I raised at any point throughout this hand, I would have certainly won less money while opening myself up to losing a huge amount of chips if my opponent happened to have me beat. By checking, I minimized my loss when the kid has the nuts while maximizing my gains when he has nothing. 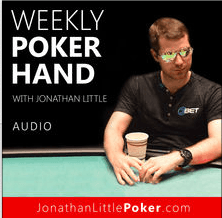 If you enjoyed this blog post, you will love my podcast, Weekly Poker Hand. Each week, I analyze a fun hand that I played and share my thought process as to why I played it as I did. Thanks for reading! Be sure to check back next week for another educational blog post.

1 thought on “Keep the Kid In”