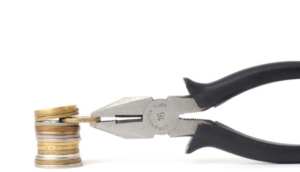 I was recently told about a hand from a $240 buy-in live poker tournament that illustrates a key error that many amateur players commit on a regular basis. Early in the tournament with blinds at 100/200 with 15,000 effective stacks, a somewhat tight player limped (called the big blind) from first position, the player in second position called and then our Hero called from middle position with Tc-9s.

While I am fine with this call, I think folding is often going to be the best play unless the opponents play particularly poorly after the flop. If the stacks were much deeper, perhaps 150 big blinds instead of 75 big blinds, limping would become acceptable. When you splash around with marginal hands, you want to have the potential to win a huge pot when you are fortunate enough to flop a premium hand. Especially as stacks get shorter, you should fold these marginal hands, even when it only costs one big blind to see the flop.

The small blind and the big blind both elected to see the flop as well. The flop came Js-8d-7c, giving Hero the nut straight. The blinds checked to the initial limper, who bet 500 into the 1,000 pot. The second position caller folded. Hero decided to call.

At this point, Hero must raise if he wants to have any chance to win a significant pot. While slow playing the nuts is always an option, when it is somewhat likely that you are against a decently strong hand, raising is almost always the right play. Notice here that the flop bettor could easily have a set, overpair, two pair, or top pair, meaning there are numerous hands Hero can extract value from.

Similar to my flop analysis, if Hero wants to win a big pot, he needs to start building the pot. Betting 500 into 2,000 is not going to get the job done. Hero should make a sizable bet of about 1,500 or even 2,000 into the 2,000 pot, allowing him to make a sizable river bet. Hero probably thought his opponent’s turn check indicated weakness, but it is important to realize that your reads will often be incorrect and betting tiny to try to get called by absolute garbage on a somewhat coordinated board is futile. Simply bet large and try to get maximum value.

I am fine with this bet size, but once the opponent check-calls a tiny turn bet, his range is often weak, meaning Hero should consider betting a bit smaller, perhaps 1,500 into the 3,000 pot.

The opponent thought for a while before folding A-J (top pair, top kicker) face-up.

While I think the opponent’s fold is much too tight, it is important to realize that if Hero raised the flop, he would have almost certainly won a gigantic pot, perhaps getting a full double up. As played, he won almost nothing. If the opponent happened to make an overly tight fold with top pair on the flop, Hero could adjust by bluffing with a wide range of marginal draws, allowing him to win all the pots where this opponent fails to flop the effective nuts. In general though, when you flop a premium hand, you want to get money in the pot, and you don’t get money in the pot by playing passively or betting small.