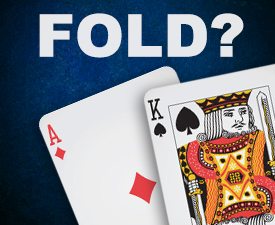 While a high amount of your profit, especially in soft or small buy-in tournaments, will come from getting maximum value from your strong hands, occasionally you will need to run a well-timed bluff. I played a hand in the recent $3,500 WPT event at Borgata that illustrates this point.

Before this hand occurred, I noticed a lady sitting directly to my right who constantly raised whenever anyone limped in. It was like clockwork. I have never seen anything like it. Her opponents would limp, she would raise, and they would either call or fold. When they called, they would usually fold on the flop to her obviously automatic continuation bet. She also 3-bet a bit more often before the flop compared to a reasonably straightforward player.  This led me to believe she was being too aggressive before the flop. Once I pinpointed this tendency, I decided that I was going to attack her whenever I thought she was out of line.

It is important to note that prior to this hand, I was reasonably within line, showing down only one bluff over the course of six hours of play. I also had not messed around with the lady too much. I thought my opponents would almost certainly fold all non-premium hands if I 4-bet, assuming they would think I must have the nuts.

I decided to use a fairly small bet size so that I could easily fold if either of my opponents decided to 5-bet. I also did not mind if the lady called 3,500 more, allowing me to play a pot in position that I would frequently win after the flop with a continuation bet. Notice if I 4-bet larger and any of my opponents continued, I would usually be against a premium hand that I am drawing thin against. You will find that using small bets to apply multiple streets of pressure is usually better than using large bets to apply only one street of pressure.

I want to make it perfectly clear that I did not make this 4-bet because I was fed up with the lady’s constant aggression, or because I was mad that I was not getting great cards. I simply thought her range was much too wide and that she would be susceptible to a 4-bet in this instance. Make sure you are not making plays that are purely based on irrational emotions.

The initial raiser thought for over three minutes before folding. The lady instantly folded, giving me the 5,200 chip pot with no contest. Of course, her quick fold means she either had rubbish, thought I had a premium hand, or both. After she folded, the initial raiser said he folded A-K. He said he was certain I had either A-A or K-K. Of course, I told him that he made a good fold. When you successfully run a bluff, you almost never want to let your opponents know that you are capable of getting out of line with junk. You want your opponents to fold A-K before the flop for as long as possible.

The player who folded A-K was trying to exploit me (by making a big fold), but instead made the worst decision he could possibly make. It is important to know what you know, and know what you don’t know. Fortunately, most of your opponents will be way too egotistical to assume their reads are not accurate.

Once you pinpoint a tendency that is easily exploitable, do not be afraid to get well out of line to exploit it. I continued to take advantage of this situation for the rest of the day, raising and reraising when I thought the lady was abusing the weak players to her right. Instead of folding when she applied pressure, as almost everyone else at the table did, I managed to win more than my fair share of pots and ended the day as the chip leader at my table.

5 thoughts on “Exploit Your Opponent’s Tendencies”