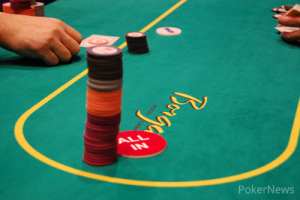 Sometimes your opponents allow you to win a pot by making a clear mistake. I recently played this hand in a $1,500 preliminary event at the WSOP. A player who had been fairly aggressive from late position raised to 1,600 out of his 35,000 stack at 300/600-100 from the cutoff and a loose, passive, weak player with 40,000 chips called on button.

I am confident they could both have a fairly wide range, as they are both loose and active. I expect the initial raiser to have a decent mix of premium and medium strength hands in his range while the caller should have mostly medium strength hands, seeing how he didn’t reraise.

I elected to make it 6,600 out of my 50,000 stack from the big blind with Qs-Tc. Both players called. With a hand such as Q-T out of position, reraising is almost always a better play than calling because when you call, you have to connect well with the flop in order to win unless you plan to run a huge postflop bluff. When you reraise, you give yourself the chance to win preflop as well as postflop whether or not you connect with the board. I was quite surprised to see both opponents call, although once the initial raiser calls, the loose, passive button will probably continue with almost every hand he called the initial raise with.

The flop came Kd-Qh-3c. I bet 7,000, the initial raiser called and the Button folded. My plan was to make a cheap stab at the pot and fold if either player raised. If either player called, my plan was to shut down on the turn unless my hand improved. The initial raiser surprised me again by just calling, as most players would either push all-in or fold on the flop. I generally expect the initial raiser to show up with a K, J-T, or perhaps a marginal made hand such as Q-J. I am in terrible shape against most of this range, which means I should give up on the pot. If my opponent’s range had a decent amount of draws in it or weak made hands such as 6-6, I could go into bluff catching mode, but since I think he would fold the small pairs and can’t have too many draws, my only play is to give up even though I have middle pair.

The turn was the beautiful (Kd-Qh-3c)-Ts. Seeing how the initial raiser only had 20,000 chips left and there was already 35,000 in the pot, I decided to go all-in. I don’t really see how he can fold any hand he called with on the flop, as even J-T made a pair and is now getting decent odds. He instantly called with A-Q and I ended up winning a nice pot.

You should notice that if my opponent went all-in preflop or on the flop, he would have forced me off my hand and picked up a nice pot. Instead, he allowed me and the Button to see a cheap flop, which gave both of us a chance to outdraw him. While I am all for letting your opponents stay in when they are drawing to three outs, when the pot is large and you have a hand that is decently strong, you should almost always try to pick up the dead money. Also notice that if the flop was K-9-3 instead of K-Q-3, I would have made the same continuation bet and probably forced my opponent to fold his A-Q. My opponent turned a super profitable all-in situation preflop, which would have allowed him to profit 7,500 chips with little risk, into a disaster where he went broke.

In tournaments, putting yourself into simple spots is a way to avoid making devastating blunders. In this situation, my opponent did the exact opposite.When you have a strong hand and there is a lot of money in the pot before the flop, don’t be scared to take a little risk and go all-in.