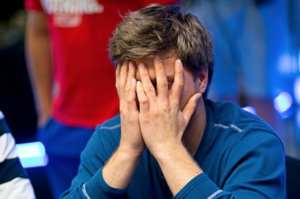 I was recently told about a hand from a $1,000 buy-in tournament that illustrates a fundamental mistake that many amateurs are unaware they are making.  With blinds at 800/1,600 with a 200 ante, a loose, but straightforward player raised to 4,000 out of his 56,000 effective stack. A tight player called in the cutoff. Our Hero decided to reraise to 14,000 with 9-9.

I do not like this reraise size at all. When faced with a 10,000 reraise, both the preflop raiser and the caller will be getting excellent pot odds, meaning they will be unlikely to fold. This would be fine if Hero had an overly premium hand that is unlikely to get outdrawn (A-A), but most flops will not be too kind to 9-9 (at least one overcard is likely to arrive). If I wanted to reraise, I would have pushed all-in. While this will force many inferior hands to fold, Hero will often scoop the 12,200 pot with no showdown. When he happens to get called, he will usually be against a decently strong range of big pairs, A-K and A-Q, but even that isn’t too terrible, as Hero will win roughly 35% of the time. Although going all-in risks going broke, it is almost certainly the most profitable option. Calling and trying to see a favorable flop is also fine.

While this may seem like a fairly innocuous hand because Hero made an easy fold on a flop that is awful for his hand, he was completely unaware that a simple all-in would have won the pot with relatively little risk, especially given the preflop raiser is somewhat loose.

To help ensure you do not make this mistake in your games, you can use the following equation to determine if a preflop all-in is profitable. If the all-in is decently profitable, it is usually the best play. If it is only marginally profitable, calling the preflop raise (or folding if your hand is junky) may be ideal. Most of the time when your stack is about 25 big blinds, reraising small (as Hero did) is not a wise play.

So, you first have to figure out how often someone yet to act will call. While it is difficult to determine with a high degree of certainty, you can estimate. The blinds will rarely call and the preflop caller is also unlikely to call because if he had a premium hand, he would have reraised before the flop. The preflop raiser will usually only call with A-A, K-K, Q-Q, J-J, T-T, A-K, and A-Q. That range is a total of 62 combinations of hands, which you can prove using a free poker equity calculator if you don’t want to count the combinations yourself. Most loose players raise from middle position with all sorts of hands, such as A-2s, 9-7s, and J-To. I estimate that most loose players raise about 310 combinations of hands, meaning Hero’s all-in will get called by the preflop raiser 62/310 = 20% of the time. To account for the players yet to act, let’s assume Hero actually gets called 35% of the time.

While profiting 3,055 on an all-in may not seem like much, two big blinds is actually a hefty profit. Also, I assumed that the preflop raiser is tighter than many loose players are, and also that the players yet to act will call more often than most players will. So, profiting two big blinds is essentially the “worst case scenario”. When the worst case scenario is a decent profit, that play should be the first you consider. 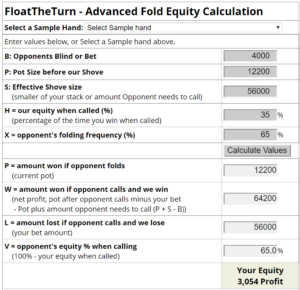 You may be wondering how you are supposed to do this math at the poker table. You aren’t! You should spend significant time away from the table crunching numbers to determine when it is profitable to make these all-in bets. If you run enough simulations, you will fully understand when this play is justified.

Fortunately for you, I just released the FloatTheTurn Advanced Fold Equity Calculator.

There, you can enter the required information and it will let you know the profitability of a shove as fast as your internet browser can load the page. While I had to spend countless hours running numbers as a fledgeling poker player, you can now do it much faster. Check out the free Advanced Fold Equity Calculator and let me know what you think!

Thanks for reading! Be sure to check back next week for more educational poker content.

1 thought on “A Common Preflop Mistake”