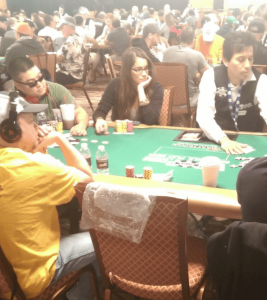 I am away on my honeymoon so this week’s blog post is a guest post by Pamela Maldonado, who is part of the editorial team at PokerNews. I hope you enjoy it. Let me know what you think!

In 2013 I played my first ever WSOP Event — the $1,000 Ladies tournament. It was a 3-day event with 954 entrants and I lasted a disappointing two hours.  Like many other players, I was eliminated by a bad beat.  I don’t like to complain so I’m not going to, but after the event was over I wasn’t as disappointed in the hand that sent me to the rail as I was in my play and outlook for the rest of that tournament.  Turns out I was a fish.

In retrospect it was the best thing that could have happened to me. I realized that even if I’d had good enough fortune to build a stack I wouldn’t have really known how to maneuver my stack for the remainder of the tournament. Fast forward to the summer of 2015 when I played two WSOP events, the Ladies $1,000 and the $777 Lucky Sevens event and it was a completely different story.

My second live tournament ever was the 2015 $1,000 Ladies Event.  I finished 83rd out of 795 entrants for my first tournament bubble. Then, a couple weeks later I entered my third live tournament where I finished 165th out of 4,422. Could there have been some run good in these two events? I’m sure there were spots, but I certainly didn’t run well for the entire events. This time around I had learned to build my stack even when I was not making hands.

How so? By doing a little bit of studying with Jonathan Little’s Secrets of Professional Tournament Poker series to be exact. Every time there’s been a poker boom there’s always been a good book or two that can help raise a player’s level of play. Problem is as the game changes over time it’s hard to get a grip on content that’s still relevant. Well in JL’s tournament series he doesn’t just recommend to play TAG or LAG. He teaches you how to adapt to almost any situation and that’s what so many players today struggle with. 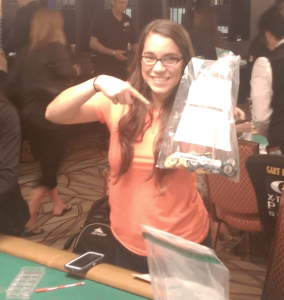 Over the years NLH has become a tougher game to beat consistently because overall players have become more informed and as a result, better. That’s why you can’t rely on just one or two styles of play. Instead, you have to utilize all styles of play and know when and how to use them optimally. JL’s tips and secrets spread over three books have done wonders for my game.

In the first book he touches on some theory, bet sizing, exploitative ranges, and most importantly what weapons you have access to based on different stack sizes. This last bit is what was most effective in my improved play. As cash games are my usual bread and butter I’m mostly comfortable knowing how to play anywhere from 85BBs to 250BBs. In tournaments, you don’t get that luxury. In JL’s first volume he tells you what you can and can’t do based on your stack size. This is golden.

In Volume 2 he dedicates the entire book to the intangibles of poker that most players don’t appreciate or value.  He talks about concepts like stages of the tournament, mental and physical approach to the game, helpful tournament tips, and what it takes to go pro. At first glance, you may think, “these concepts are common sense, I can just skip it and go to the last volume,” but you’d be a fool to do so like I was.

In my last Lucky Sevens event where I went through a gigantic field, I completely neglected an important part of my game right before my 165th place exit and that was my physical conditioning. In a live event with thousands of players in the field you can be playing twelve-hour sessions for 3-4 consecutive days. I don’t know about you, but I don’t even put that many hours in for a regular cash game session. I completely undermined my nutrition, sleeping patterns, and endurance. So much so that within my final hours of play I had forgotten what the blinds were once, lost track of how many chips I had twice, and then finally got it in bad in a terrible spot I wouldn’t have otherwise had I not undermined my health. You’re leaving a lot of money on the table if you don’t take care of these things off the table so that you’re fully prepared to reap the benefits come game time. 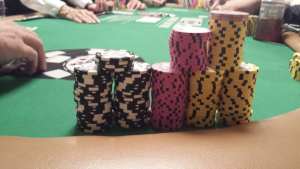 Lastly, you’ll get to Volume 3 or what I like to call “Bringing It In.” At this point you’ve built a solid foundation that will prepare you for the 150 hands of analysis JL has recorded and explained in this last volume. This book is about building your intuition as a player so that when you get to the tables you can almost by nature know what direction you want to go within a hand and explain your reasoning behind it on every street.

I can’t thank Jonathan enough for the information he’s put into his tournament book series.  And if you’re truly interested in raising your game then you’ll not only buy these books, you’ll study them. I highlighted, marked, and took notes throughout the entire series. Moreover, I would watch one or two of his webinars he provides to his email subscribers just to really bring home the concepts that you’ve learned. At the end of it all, you’ll finally get closer to truly understanding what level your game is at and how to keep developing your skill by yourself and with others.

2 thoughts on “Adapt or Perish”