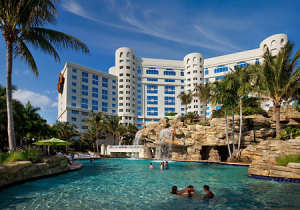 I recently had the pleasure of traveling to Hollywood Florida to play in a tournament series at the Seminole Hard Rock. Over the course of two weeks, I played three major events with buy-ins of $3,500, $10,000, and $15,000. In the middle of day 1 of the $10,000 event, I found myself in a difficult spot where I think I paid my opponent off incorrectly.

With a 41,000 effective stack at 200/400-50, everyone folded to me on the button and I raised to 1,050 with Ah-Kh. I had been reasonably active throughout the day, although I had folded my button a few times because both players in the blinds played well. The player in the small blind, a kid who I frequently see on the circuit, 3-bet to 3,500. He seemed to generally be in line and had not messed around versus me so far. I got the vibe that he was playing straightforwardly against the good players, electing to play most of his pots versus the amateurs.

I think both calling the 3-bet and 4-betting are fine plays with my Ah-Kh. Since I like to 4-bet bluff from time to time, I also need to 4-bet with my value hands, so I 4-bet to 7,600. The small blind thought for a few moments before calling. At this point, I thought his range was reasonably strong, and it could certainly include all his premium hands. I didn’t expect to see many drawing hands like 8s-7s or 3-3, although perhaps he would 3-bet those hands from the small blind and then call my 4-bet because the player in the big blind was a great player. In general, when facing a raise from the small blind when the player in the big blind plays well, you should 3-bet most of your playable hands in order to make the big blind fold. When the big blind is a weak player, you should be more inclined to call because you don’t mind if the the weak player sees a flop.

The flop came 5d-3d-2d. My opponent checked and I checked behind. I don’t think there is any point in betting this flop because most of my opponent’s range will call. If he has an over pair or any reasonable diamond, he will call any bet. If he doesn’t have either of those, I will likely be able to win with my Ace-high at a cheap showdown.

The turn was the (5d-3d-2d)-As, improving me to top pair, top kicker. Much to my surprise, my opponent bet 8,000 into the 16,050 pot. I did not expect him to bet in this spot because the Ace should be much better for my range than his, given I 4-bet preflop then checked behind on the flop. Despite this, I don’t think I can fold. My opponent may bet A-Q or A-J for value and he may decide to bluff with a hand like Kd-Qs. I wasn’t too concerned about straights, sets, and two pairs because I didn’t think he would call my preflop 4-bet with those hands. Raising is a bad option because my opponent will play perfectly, calling when he has me crushed and folding most worse hands. This analysis led me to call.

The river was the (5d-3d-2d-As)-Kc, improving me to top two pair. My opponent pushed all-in for 25,350 into the 32,050 pot. At this point, my normally strong hand is effectively a bluff catcher. I don’t think my opponent would push A-Q or even a worse two pair for value. This means that if he is betting for value, it is with a flush, set, or straight. I discounted most of the straights and sets due to the preflop 4-bet. This means that if he is value betting, it is with a flush. It is worth noting that there should be very few flushes in my opponent’s range, primarily Ad-Kd, Ad-Qd, Ad-Jd, and Kd-Qd. Of course, he could have weaker flushes but I didn’t think he would 3-bet and then call a 4-bet with those.

The main problem I ran into is I couldn’t come up with many hands this specific opponent would turn into a bluff. If he had the Ace or King of diamonds, but not a flush, he would probably check the river, hoping to win at showdown. I didn’t think he would turn a hand like Jd-Js into a bluff. Given the way he played throughout the day, he just didn’t strike me as the type of player who would bluff off his stack. Then again, this hand is from a $10,000 event, which implies that most opponents are capable of bluffing some portion of the time.

If his value range is only premium flushes, then I think I have to make the crying call because if he is ever bluffing, folding is a disaster. Notice I need to win 30% of the time based on the pot odds. If my opponent is value betting the four combination of premium flushes and only two combinations of bluffs, I have marginal call. Essentially, if he bluffs with any portion of his range, calling is mandatory. If his value range expands to hands like 7d-6d and 4-4, then calling would be terrible unless he is turning a huge number of junky hands into bluffs. Notice in this scenario, he would have many combinations of value hands, meaning even if he was bluffing most of his busted flush draws, he would still have mostly hands that are better than mine. 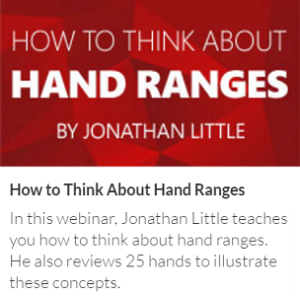 After what felt like an eternity, I decided to call, going against my read because my hand seemed too strong to fold. My opponent showed me Kd-Qd for the second nuts. Next time I am going to trust my hand reading abilities! If you want to learn more about how to improve your hand reading skills, check out this exclusive webinar where I review 25 situations  designed to help you learn to put opponents on ranges. (You can watch the first part of the webinar for free!)