Identifying and Exploiting an Opponent’s Weakness 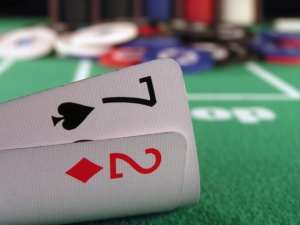 I am currently away on my honeymoon, so this week I will share with you a letter from Ken Adams, who I have helped with poker throughout he last few years. He walks us through a short cash game session he recently played. I think you will enjoy it. Let me know what you think!

Recently I played a $2/$5 NLH session at my local card room that turned out to be much more profitable than it would have been before I joined  www.floattheturn.com and read your books.

Initially I was assigned to seat #8, where the previous tenant had gone broke.  I bought in for $500 – the maximum amount permitted.

The biggest stack (over $2,000) belonged to a 40-ish guy in seat #10.  He was opening (or raising) almost every hand, and betting relentlessly after the flop nearly every time.  (It was as though he was trying to channel Vanessa Selbst, the way she played five years ago.)  Most of the time he took down the pot uncontested, after the flop or on the turn.  Any time someone took him to the river, he put them all in.  So he was building big pots.  And he was winning enough of those to maintain his stack, though it fluctuated quite a bit.

After a while I picked up 8-8 in the lojack seat.  There were two limpers, and I opened for $30.  Seat 10 re-raised, which led the blinds and the limpers to fold.  I called, so I was heads up vs Seat 10, out of position.  The flop came K-7-5 rainbow.  I checked, knowing he would make a sizeable continuation bet, which he did.  I called, as his range included lots of hands I was beating.

The turn was a (K-7-5)-6, creating both a straight draw and a flush draw.  I checked, he made another big bet, and I check-raised all-in with my second pair and open-ended straight draw.  I wasn’t sure whether I wanted him to call or fold.  He called.  The river was an offsuit 2.  I tabled my 8-8 and when he mucked, his cards flashed slightly; it looked like he had A-7.

I doubled up against Seat 10 a second time when I opened in the hijack seat with Ah-9h and he called on the button, as did the Big Blind.  The flop came As-Th-4h.  The Big Blind checked, I bet, Seat 10 raised, the Big Blind folded and I called.  The turn was the (As-Th-4h)-9c.  I checked, expecting Seat 10 to bet, which he did.  I decided to call rather than raise, figuring that would maximize my chances of keeping him in the hand.  The river was the (As-Th-4h-9c)-2h!  I saw him look down at his chips in a way that appeared he was eager to bet.  So I checked again.  He bet, I check-raised all-in, he snap called and turned over the Kh-Jh!

In both hands I felt I was able to apply what I have learned from you, in terms of exploiting an opponent’s weaknesses.  This player’s tendencies were so extreme and obvious that it didn’t take me long to figure him out, and to exploit him.  No one else at the table appeared to be doing that.  They were waiting for big hands in hopes of trapping him.  But he was good enough to see that, and when they played back at him he folded unless he had a big hand.

After the second double up he slowed down against me.  Fortunately seat #2 opened up, and I was able to get position on him, which was beautiful, as I was able to get him to fold to my marginal hands when I needed to.  Basically, he stayed away from me while continuing to pound on the rest of the table.  Because he was in nearly every pot, I could pick my spots against him.  I don’t think I lost a single chip to him the entire session.

I ended up booking a $1,200 win in 3.5 hours of play, with most of it coming from Seat 10.  And he still had nearly $2,000 when I left to go home for dinner.  Basically he was taking money from the rest of the table, and giving it to me!  Sweeeeet!  I just wish it were always that easy.

Your advice has led me to change my game in many ways.  Some changes, like bet sizing, have been relatively easy to implement.  Others (like accurately putting opponents on a range of hands and narrowing their range as the hand progresses) continue to be more difficult for me.

It is easier to say “figure out each opponent’s tendencies and exploit their weaknesses” than it is to actually do it in real time.  But in this instance, the player in Seat 10 made it easy.  His style of play was so exaggerated, and so easy to exploit, that it seemed obvious rather quickly.  Then it was just a matter of waiting for the right opportunities and capturing them.

It remains to be seen whether I am able to do that as successfully with players whose tendencies and weaknesses are not as immediately obvious or exaggerated.  I expect it will take me a fair amount of time and practice, and that improvement will come only gradually since I don’t get to play all that often.  But if I can get into a game with the guy from Seat 10 every once in a while, it will give me encouragement to stick with it. 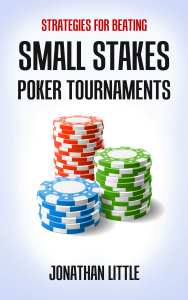 For an in-depth discussion on how to exploit the tendencies of most typical opponents you will encounter in the small stakes games, check out my best-selling book, Strategies for Beating Small Stakes Poker Tournaments. It is only 80 pages long but it is packed with actionable information that will instantly improve your game. I decided to make it as affordable as possible, so it is only $4.99. I hope you enjoy it. Let me know what you think! Be sure to check back next week at JonathanLittlePoker.com for another educational blog post. 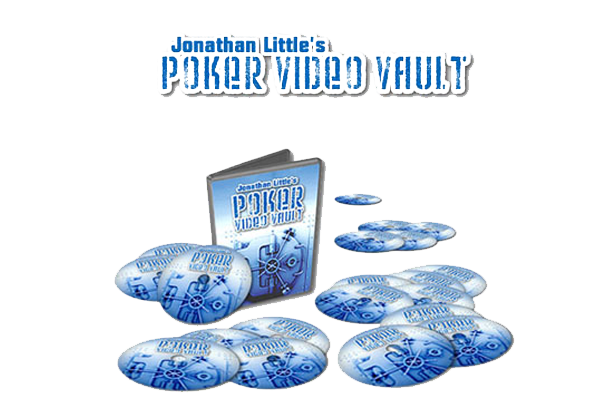 My video has been reinstated on YouTube!🔥🔥 I get questions every day from students asking what the best way to make money in poker is. In this video, I will show you How to Make $100K/year from Playing Poker! #Poker #Coaching youtu.be/zjwS1mwI3vM pic.twitter.com/5kxbFCsvfb

I've decided to give you all one of my Best-Selling Poker E-books for FREE to study from. Work hard and you'll be crushing small stakes games in no time! #Poker #Gift pages.pokercoaching.com/free-… pic.twitter.com/GtlZjrKXZp

Check out this @PokerCoaching_ Blog Post from @mcmattopoker: My Favorite Places to Play! Learn some of Matt's favorite poker destinations and what he looks for when traveling to play poker! What are some of your favorite places to play? #Poker pokercoaching.com/poker-strat… pic.twitter.com/DQQ5yYiCFo

What's the #1 lesson that you've learned from poker that helps you in your daily life? #Poker #Lessons

In this video, I review some major hands that I played at WPT Montreal. Analyzing and reviewing the play from high-pressure events is a great way to learn and improve your game! #Poker #Strategy youtu.be/gM2lkko0Brw pic.twitter.com/3o8M9VWhc2