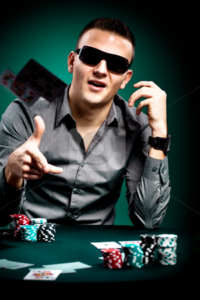 A while back I had the opportunity to play in the €5300 European Poker Tour Malta main event. Things were going reasonably well. I had built my 30,000 starting stack up to 80,000 when the following hand took place. My opponent in this hand is a world-class player who regularly takes creative betting lines. While he generally plays a tight, aggressive strategy, he is certainly capable of getting well out of line if he thinks the time is right.

At this point, I was somewhat unsure what my opponent’s 3 big blind raise meant. He was varying his open raise size between 2 big blinds and 3.5 big blinds. If I had to guess, I would say that the larger raises were likely weak hands, but it is impossible to know for sure. If I think my opponent’s range is weak or if I think he would play in a tight, straightforward manner if I 3-bet, calling becomes the best play. It is important to note that I do not have to worry about the blinds coming along as often as I normally would due to the hefty 3 big blind raise size. Of course, if I have an aggressive dynamic with my opponent, 3-betting would be the best play by far because then, I could happily get Q-Q all-in preflop or at least bloat the pot in position in a spot where my opponent would be unlikely to fold. I would estimate that I 3-bet Q-Q in this situation about 95% of the time, but this time, calling seemed ideal.

The flop came Jh-9h-4c and my opponent checked.

I was somewhat surprised by the check although I know this specific player likes to take abnormal flop lines. He could easily have total air and be giving up, or a marginal made hand, a strong made hand, or a draw, looking to either check-call or check-raise. Unless he has a set or an overpair, I have the best hand, so at least at the moment, I am not too concerned with being beat. Betting is a great option if it will get called by most marginal made hands and draws. If my opponent check-raised, I would be in a tough spot but I would likely call with the intention of calling down against this specific player on most safe run outs.

At this point, given what I know about my opponent, he could have a wide range of hands, although he is likely only taking this line against me with a very specific set of hands. I would generally assume he does not have many marginal made hands, perhaps middle pair and worse, but he could certainly have top pair and better. He could also have all of the draws. Against this range, I am in great shape with my overpair, but if I raise, I am unsure if he will invest his entire stack without a better made hand than mine or a premium draw. Since I am in great shape against my opponent’s turn betting range but only marginal shape against the range he would likely continue with if I raised, I called. Any time you are in fantastic shape if you take a passive line but marginal shape if you take an aggressive line and get action, you should take the passive line.

Given all of the draws missed and my opponent could easily be value betting with top pair, calling is the only option. This situation would be much tougher if my opponent went all-in, betting 55,800 into the 32,600 pot, although I would likely still call because it is somewhat difficult for him to have a 9 given my turn read that he would check most middle pairs. As on the turn, I think I have the best hand almost every time if I call, but if I raise, I will probably only get called by perhaps K-J and better made hands. While I beat A-J and K-J, I lose to every other strong hand. Of course, if my opponent thinks I am wild, he may call my raise with made hands as weak as Ace high, mainly because all the obvious draws missed. However at this point, I think my opponent viewed me as a strong player who generally takes lines that do not lead to unnecessary risk.

I called and beat my opponent’s As-Jc.

While I clearly missed value against his exact hand, I still like my play. It is important to not “beat yourself up” when you choose a line that is likely ideal against your opponent’s entire range. In this situation, calling on the turn and river makes it nearly impossible for me to go broke when I happen to be beat while at the same time extracting value from worse made hands and draws. Raising would have protected my hand and perhaps got value from exactly A-J and K-J, but it also opens the door for me to lose my entire stack, which would have been a disaster.

If you enjoyed this blog post, be sure to go back and read all the other entries on JonathanLittlePoker.com. Each week I post a fun and educational blog post, so mark your calendars and check them out!

I will be at the WSOP for the rest of the summer, so expect lots of fun hands and video blogs. Thanks for reading!

6 thoughts on “Tough spot against a creative player”