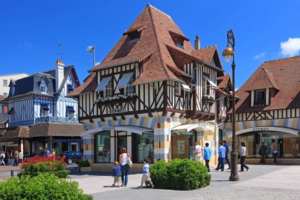 Last year I had the opportunity to travel to Deauville, France for the European Poker Tour series. Even though I had only marginal success, cashing for the minimum in the €10,000 buy-in high roller event, I got to play lots of fun hands. This hand is from a €5,000 buy-in six-handed turbo tournament. My opponent is a loose, aggressive kid who I have been pushing around so far. While I am not sure if he is a stereotypical overly aggressive European kid, I tend to assume that European kids are overly aggressive until they prove otherwise.

With a 30,000 chip stack at 150/300 with a 25 ante, I limped in from the small blind with Qh-2c when everyone folded to me. I think that limping and raising are the only realistic options when there are antes in play. There is simply too much money in the pot to justify folding, even if you expect your opponent to play well. If I thought my opponent would frequently fold, I would raise, but I assumed that this opponent would be good enough to know that he should either call or 3-bet with a wide range. This led me to limp instead.

I explain my small blind strategy versus strong opponents in great detail at my interactive poker training site, PokerCoaching.com.

I almost certainly have the best hand and I expect my opponent to call with a wide range of “made” hands, perhaps as weak as King high, and any gutshot straight draw. When there are numerous hands you beat that your opponent will call a bet with, you should usually bet for value.

Value betting this turn would normally be a good idea, but I thought my opponent’s range consisted of numerous trashy hands that could not realistically call another bet, so I decided to check. Checking forces my opponent to stay in the pot with all of his worse hands that I crush, such as A-2, K-9, 9-7, and 3-3. Another added benefit of checking is that it makes my hand appear to be either marginal or weak. If my opponent thinks I have a marginal or weak hand, he may be inclined to bluff, especially if he cannot win at showdown, such as when he has 9-5. When your opponent is drawing thin, especially if he may turn his hand into a bluff, you should check and give him the opportunity to get out of line.

My opponent disappointed me by checking behind.

Again, both betting and checking are fine options. When my opponent checked behind on the turn, I assumed that he had a marginal hand that he thought could win at the showdown a decent amount of the time. If he has a marginal made hand, such as 8-7 or 6-3, he would probably check behind if I checked to him on the river whereas if I bet, he may call. Against this specific opponent, I thought that if he had a hand that fared poorly against my value betting range, such as A-2 or K-9, that he may elect to turn it into a bluff if I bet whereas if I check, he may check behind, thinking it could be good against my “obviously” weak hand. All of this led me to bet 1,100 into the 1,625 pot.

My opponent surprised me by raising to 3,600.

While most players would trivially fold top pair with a terrible kicker in this situation because they assume that most players primarily raise the river with premium hands for value, given my analysis of the table dynamics and my specific opponent, I think this is an easy call. I assumed my opponent would at least consider raising the river as a bluff, especially given I checked the turn. While I could be beat by a straight or two pair, I thought there were enough missed draws and high-card hands in my opponent’s range to justify calling.

I flicked my calling chips into the pot about half a second after my opponent put his raise. I was pleased to see him disgustedly muck his hand, awarding me the pot. It is important to always think ahead about your plan for the future betting rounds as well as how your opponent will react to your plan. If you can see what is likely to happen before it happens, you will be able to develop a plan that allows you to sidestep difficult decisions while constantly putting yourself in profitable spots.

If you enjoyed this blog post, I suggest you check out my interactive poker training site, PokerCoaching.com. Each week I present two hand quizzes to test your skills, and each month, I host a homework review webinar where I analyze my students’ answers to a homework question designed to teach them how to develop a robust understanding of poker.

Be sure to check back next week at JonathanLittlePoker.com for another educational blog post. Thanks for reading. 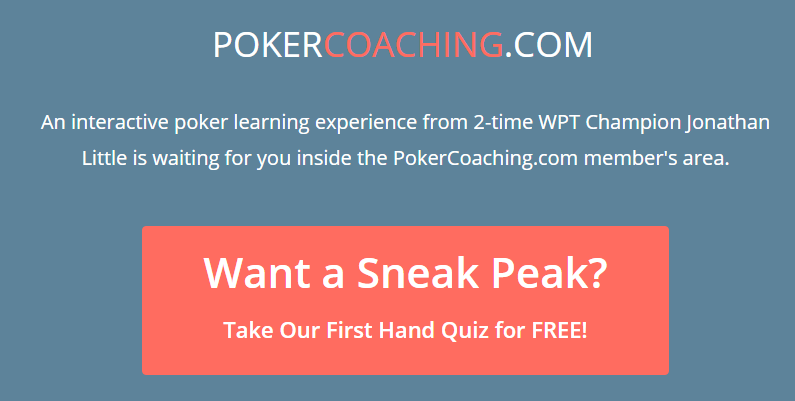