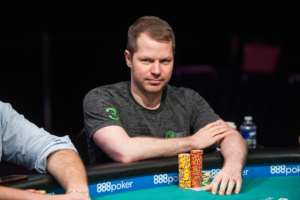 The World Series of Poker upon us, so today I want to share an article from a few years ago that illustrates my mindset during the WSOP. I hope you enjoy it!

Before coming to Vegas, I decided to spend my time and energy during the WSOP focusing on the WSOP events and getting in great physical shape. This implied I would not stay up all night playing cash games or out on the town. In my first 10 tournaments, I made no dinner breaks and no day 2’s, which was certainly not how I wanted to start the series. I felt like I was playing well but I was simply not winning any all-in confrontations. Fortunately, my schedule (which includes almost all no-limit hold’em and pot-limit Omaha events) consisted of mostly small tournaments to start. Despite losing 10 events, I was only down $15,000 or so. Although I was running poorly, I showed up to the Rio every day ready to play my best. I was rewarded by making the final table of the $5,000 8-handed event, finishing in 6th place for $85,000. I am going to share a fun hand with you that gave me a nice chip stack at the start of the event that allowed me to chip up consistently throughout the tournament with very few major confrontations.

With blinds at 75/150, playing six-handed (because in the early levels of WSOP events, a few seats are left open for people who register late), a loose, aggressive player raised to 400 out of his 25,000 effective stack from the hijack seat. I decided to apply some pressure and reraise to 1,100 with Ac-2c from the cutoff. Only the initial raiser called. It is important to develop an aggressive dynamic with the players on your right so they will be a bit more prone to pay you off in the future, when the blinds are significantly larger.

The flop came 8c-5c-3c, giving me the nuts. My opponent checked and I bet 1,200 into the 2,425 pot, hoping he had some sort of flush draw or pair that would be unable to fold for one bet. I was glad to see my opponent call. I was loving my hand!

The turn was the (8c-5c-3c)-8s, making my hand significantly weaker. Despite this, after my opponent checked for the second time, I bet 2,100 into the 4,825 pot, again hoping he would get stubborn and look me up with trips, an overpair, or a flush draw. My opponent obliged and put in 2,100.

The river was the (8c-5c-3c-8s)-Qc, making it quite difficult for me to get paid off by many worse hands due to four clubs being on the board. My opponent checked for a third time and I decided to bet 6,800 into the 9,025 pot. I thought he may trick himself into thinking that if I am continuing to make a “standard-looking” value bet that I “must” by bluffing. He thought for around five minutes before calling, only to muck his hand when I showed the ace-high flush.

While this hand may appear to be trivially straightforward to some, I think the vast majority of players would slowplay on the flop or turn by checking, trying to make their hand look much weaker than it is, or they would bet smaller on the river, thinking that their opponent would essentially never call a big bet. When you are deep stacked against a loose, aggressive opponent, it is often a good idea to bet your made hands in a straightforward way because he will assume that “obviously straightforward” lines must be bluffs a large percentage of the time, because that is how he would play his bluffs. Of course, in order for this line to trick your opponent, he must think you are capable of taking this line with a bluff. If it is clear that you almost always play in a straightforward manner, even the most loose, aggressive players will make snug folds against you. In order to get paid off, especially against thinking players, you simply must get out of line from time to time. Remember, this hand started off with me reraising before the flop with Ac-2c, a play most tight players would never even consider. If you aren’t getting a bit out of line in an aggressive manner, you will have a tough time getting paid off when you are lucky enough to flop the nuts.

I hope you enjoyed this article. If you did, please share it with your friends. Be sure to check back next week for another educational poker article. Thanks for reading and good luck in your games!