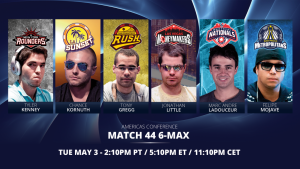 The action in the Global Poker League has been fast and furious. I have played lots of matches so far and in general, I am happy with my play.

In my second 6-handed match, I got away with a fun check-raise bluff on the turn and generally got to play some poker. Even though I took 3rd place by running J-6 into J-7 on a J-7-4-8-J board, I think I played particularity great in this match.

In this match, I made a fold with A-K before the flop that I initially thought was close, but upon further analysis, I realize was optimal. With five players remaining at 300/600-75, I raised to 1,500 out of my 18,500 stack with A-K from first position. Tyler Kenney, who had played quite snugly in the Global Poker League up until this point, reraised to 4,155 out of his 30,000 stack from the cutoff. The button folded and then Marc-Andre Ladouceur, who also seemed to generally be in line, went all-in from the small blind for 24,500.

If I was only facing a 3-bet, I would have happily pushed all-in with my A-K, but when facing a 3-bet from someone who I perceived to be in line plus an all-in 4-bet from another player who I also thought was in line, A-K shriveled up. While it is unclear how often Tyler is bluffing, I didn’t think he was bluffing too often. I assumed his value range was something like A-A – T-T, A-K, and A-Qs. Perhaps he 3-bets with other high card hands and smaller pairs with the intention of folding if someone goes all-in, but I didn’t think that was the case too often. I thought Marc-Andre had almost entirely value hands, perhaps A-A – T-T, A-K, and A-Qs. While he is certainly capable of bluffing in this spot, my general read was that most solid players were not trying to be heroes early in the Global Poker League.

Assuming Tyler will fold every time if I go all-in (which certainly isn’t realistic as he will never fold A-A and K-K) I will have 43% equity versus Marc-Andre’s perceived range. Since I need to win roughly 40% of the time to break even based on the pot odds, calling is a marginally profitable decision, at least in terms of chips. However, since you win points based on where you finish in the Global Poker League, there are payout implications to be considered. This means that I need to win a bit more than the pot odds dictate, meaning I should make a snug fold with my A-K.

Notice that if Tyler calls Marc’s 4-bet all-in plus my all-in, he will likely have A-A – Q-Q. If we add that range into the mix, I will only win 19% of the time, putting me in horrible shape. All in all, even though I have A-K with a somewhat short 30 big blind stack, I have to fold.

Unfortunately for me, Tyler had Q-Q and Marc-Andre had T-T. If I knew their hands, I would have called. An Ace came on the flop and I would have tripled up. However, you cannot be result oriented. Looking back, I am happy with my fold and I am glad I made it in front of a large audience in real time. If you haven’t already, be sure to watch the replays of my Global Poker League games at JonathanLittlePoker.com/GPL.

Would you have folded in this spot? I certainly didn’t like making the fold! Let me know in the comment section below. Be sure to check back next week for another educational blog post.