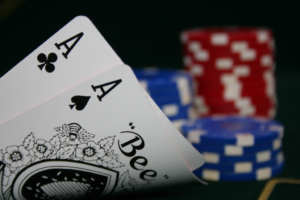 While limping has some merit against the absolute worst opponents, against the competent players who are willing to buy in for $5,000, I prefer making a standard raise with all of my playable hands to disguise my range.

A strong middle aged player called from middle position out of his 16,000 stack, as did the small blind and big blind. Both players in the blinds were reasonable players who had 20,000 stacks.

The caller’s range is likely somewhat wide, including any pair (besides pocket pairs worse than middle pair) and all flush draws. I can discount K-K, 8-8, and 2-2, as those will usually feel obligated to raise the flop. K-8, K-2, and 8-2 are unlikely because those hands would not call my initial preflop raise. This led me to believe that I am either against a worse made hand or a flush draw.

The turn was the (Kh-8h-2d)-3s. Given this card is highly unlikely to improve my opponent to a better made hand than my pocket Aces, and I thought my opponent could easily call a turn bet with most pairs and flush draws, I decided to bet 2,600 into the 5,625 pot. My opponent called.

Looking back, I should have bet a bit larger on the turn. In my opinion, any decent pair or flush draw will call a bet of 3,500 or so. I left a bit of value on the table.

After some thought, my opponent pushed all-in for 11,275 into the 10,825 pot. That was not what I wanted to happen! At this point, I have to figure out my opponent’s river pushing range and see how my A-A fares, which implies I had to figure out which hands he is checking. Most players would not go all-in with top pair in this situation, opting instead to check and win at the showdown most of the time. Many players would also not turn a hand like 9-9 or 8-7 into a bluff, although some excellent players would (because those hands are now at the bottom of their range). Notice that there are very few other hands in my opponent’s range that could be turned into a bluff, given I rarely expect my opponent to get to the river with an unpaired hand that didn’t improve to a flush.

Because of this, I decided to fold to my opponent’s all-in. Of course, my opponent may have made a sophisticated bluff with top or middle pair, but I think I am beat most of the time. It is important to constantly assess opponent’s range and see how your hand fares. In this spot, I think folding is the only play that makes sense. Just be sure you structure your river checking range so you can call the all-in in an unexploitable manner. If you fold to an all-in every time you check, you are ripe for exploiting.

12 thoughts on “Folding A-A on the River”