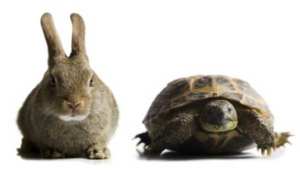 I recently played an interesting hand in a $1,500 buy-in live tournament. Everyone started with 15,000 chips at 50/100 with hour-long levels, meaning there was lots of time to hang out and wait for strong hands. I realized that everyone at my table was implementing that strategy so I quickly adjusted and decided to attempt to steal every pot once it was clear no one was interested in winning. This allowed me to double my starting stack within three hours with almost no risk, which is always an amazing result. You will find that when you are constantly pushing your opponents around, your observant opponents will eventually assume that you are overly wild and may adjust.

This hand took place at 150/300 with a 25 ante. A weak, tight player who was clearly waiting for strong preflop cards raised to 750 out of his 11,000 stack from first position. Two players called, one from middle position and the other on the button. I looked down at A-K (normally a premium hand) from the small blind and decided to just call.

When facing a first position raiser who almost certainly has a premium hand, bloating the pot from out of position with a normally premium hand, even with other callers in the pot, will get you in trouble. You must realize that A-K will only win around 40% of the time against a range containing A-A, K-K, Q-Q, J-J, and A-K, which is almost certainly what you will be against if the initial raiser decided to reraise. If you reraise and the initial raiser calls, everyone else will likely call, forcing you to play a four-way pot from out of position. Since both of these results are quite bad, calling is almost always the best play because it forces your opponents to stay in the pot with hands you dominate while also under-representing your hand.

The flop came A-10-8, giving me top pair. I checked, as I would do with all of my hands, and the initial raiser bet 2,000 into the 3,375 pot. Everyone folded around to me.
While I would normally call in this situation to keep my opponent in the pot with a hand that is likely drawing thin, such as A-J or K-K, I was convinced that my opponent liked his hand. Since I had an ace in my hand, I was unlikely to be against A-A. I also thought it was fairly unlikely that he had 8-8 because he would have limped with that preflop (for the record, limping 8-8 is vastly inferior to raising). This means that unless he had exactly 10-10 I was either chopping against A-K or ahead against A-Q or A-J. I did not get the vibe that my opponent would fold his strong hands because most amateur players who employee an overly tight preflop strategy tend to go way too far with their marginal made hands because they feel that since they so rarely enter the pot that they must win every time they connect with the board.

So, I went all-in. My opponent proudly called and turned up his A-Q. He could not believe it when I turned up A-K because in his mind, I “must” reraise with that hand before the flop.

Even though I got all-in with 86% equity, meaning I will win 86% of the time, my opponent caught a queen on the river, awarding him the pot. Although I suffered a bad beat, I still had 19,000 remaining in my stack, which was more than my starting stack. Playing a loose, aggressive strategy allowed me to not only accumulate a huge stack with little risk, but also to get paid off in a situation where my opponent should have at least considered folding. Despite the unlucky situation I still had a nice stack that I used to make a deep run. Always pay attention to your opponents’ strategies and adjust your play to take advantage of their mistakes.

If you enjoyed this blog post, you will love my interactive poker training site, PokerCoaching.com. There you can test yourself with over 100 interactive quizzes and study the game with me with monthly homework questions and review webinars. If you want to take your game to the next level, sign up for a completely free one-week trial at PokerCoaching.com.

14 thoughts on “Playing fast and slow”