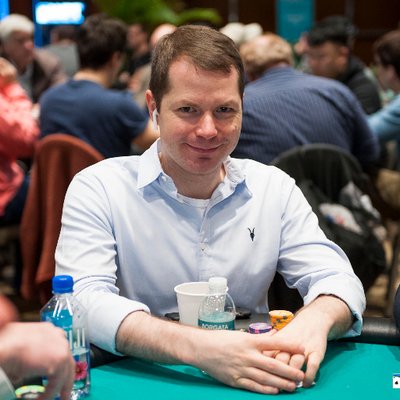 I have recently been spending a decent amount of time working on my turn and river strategies. It is somewhat easy to play in a relatively straightforward manner and not do anything horribly wrong, but if you want to succeed at the highest levels, you simply must be willing to make what may appear like an optimistic bluff from time to time, often when you find yourself with one of the worst hands in your range or when you block the nuts. On one of my recent poker trips outside of America, I made a point to play a bunch of online tournaments take as many turn and river spots that I could. Here is one of them:

On day two of a $100 buy-in event that started with 20,000 players, with blinds at 2,000/4,000 with a 400 ante, the action folded around to a somewhat loose, aggressive player in the cutoff who raised to 8,000 out of his 165,000 stack. I defended my big blind with Ac-6s. When facing a min-raise, you need to defend with a wide range if you don’t want to allow your opponents constantly steal your blinds. I defend with many hands that are much worse than A-6.

I do not think raising has much merit because when my opponent calls, he will have either made hands that crush me or draws that have plenty of equity. With my marginal made hand from out of position, my goal is to get to the showdown as cheaply as possible. Folding would be too tight, even though I could easily be in bad shape.

I could certainly fold on the turn, but given my opponent’s loose, aggressive tendencies, I am fine seeing the river. I fully planned to fold to an additional bet if I failed to improve. You must be careful to structure your ranges such that you do not fold too many of your holdings on any individual street. In this spot, folding this specific bottom pair would be a bit too weak against all but the tightest, most straightforward opponents.

I was unsure what to make of my opponent’s bet size. Of course, he could easily have a nut hand such as a flush, straight, or set. He could also value bet with all over pairs and top pairs. However, given I have the nut flush blocker (it is impossible for my opponent to have the nut flush when I have the Ace of clubs in my hand) and a 6 (making it more difficult for my opponent to have two-pair or a set) I decided to turn my weak bottom pair into a bluff, hoping to make my opponent fold his one-pair and perhaps some of his two-pair hands.

After some deliberation, I went all-in for 80,400 more. My opponent thought for about a minute before mucking, awarding me a sizable pot.

I continued making somewhat aggressive plays until I lost a big all-in coin flip at the end of day two, leaving me with only 10 big blinds with 27 players remaining. I eventually petered out in 18th place, cashing for roughly $5,500. All in all, it was a lot of fun!

7 thoughts on “Check-Raise Bluffing the River”