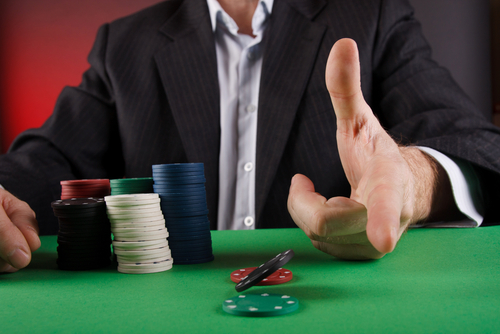 This hand I was told about from a $500 buy-in tournament clearly illustrates an important concept you must master if you want to succeed at poker.

With blinds at 800/1600-200 with a 45,000 effective stack, the button, an unknown player who seems to be a bit too aggressive and splashy, called. Our Hero raised to 4,000 with Ah-6s from the small blind. The big blind folded and the button called.

Assuming Hero wants to raise, he should raise larger, perhaps to 5,000. When facing a raise of only 2,400 on top of his 1,600 limp, the button will call with his entire preflop limping range. In general, when you are out of position (as Hero is), you want your opponents to fold. This should lead you to use a raise size that gives your opponent a realistic opportunity to fold.

Both betting small and checking this flop are fine plays. If the button will call with a wide range of hands and then apply pressure on lots of turns and rivers, Hero should check. If the button will play in a blatantly straightforward manner when facing a bet (raising with his premium hands, calling his marginal hands, and folding everything else), Hero should bet. In general, hands with marginal amounts of showdown value should be checked because if you bet and get called, you are usually in bad shape.

I do not like this turn bet against most competent players because their calling range will include only decent made hands that Hero loses to and draws that have a lot of equity against Hero’s weak pair. By checking, you can easily call a bet because the button may turn many of his draws into semi-bluffs. Quite often though, the turn will check, allowing Hero to check-call all non-heart rivers. Checking also takes away the button’s ability to raise the turn, which would force Hero to fold.

This is a tough spot because Hero’s turn bet doesn’t do much to narrow the button’s range, meaning he should have all busted draws (which Hero beats) in his river range. The tough part is knowing whether or not he will bluff in this manner with some portion of his missed draws. Some players will play their value hands and bluffs the same way, betting 15,000 with both types of hands. Others will vary their bet sizes, making one bet size with their bluffs and a different bet size with their value hands. If Hero thinks the button will bet the same size with his entire range, and he will bet with all his bluffs, he has an easy call because he only needs to win 23% of the time to break even, based on the pot odds. If Hero thinks the button will only or mostly bet this size with his value hands, Hero should fold because he loses to all value hands.

Hero decided to fold and the button showed Jh-9d for a bluff (and a very optimistic turn call!).

If Hero elected to check either the flop or turn, he would have been able to see a somewhat cheap showdown a large portion of the time. Of course, the button could have run a sizable bluff, betting all three streets (and pushing all-in on the river), but most players are not willing to risk their tournament life on an all-in river bluff. If Hero played this hand a bit more cautiously, he would have won a medium-sized pot. Instead, he lost a medium-sized pot and got exploited by his opponent.

Thanks for taking the time to read this blog post. If you enjoyed it, please share it with your friends. Be sure to check back next week for another educational blog post. Good luck in your games!