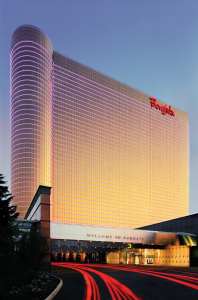 While playing in the $2,700 buy-in Borgata Spring Poker Open Main Event, I found myself in a tricky spot on the river that I would like to share with you. My primary opponent in this hand is a 50 year old player who seems to be somewhat loose and passive. He also seems to overvalue most of his premium hands, which is a common trait most amateurs display.

With 9s-5s, I am fine with all three options, limping, raising, and folding. I prefer limping because my hand is fairly weak, but still has some postflop potential, and I know that if I raise, my opponent may somewhat blindly call me down after the flop with any marginal made hand. If I thought my opponent would play in a weak, passive manner after the flop, folding to a simple continuation bet most of the time, I would have raised. If I thought he would play well, I would have folded.

The flop came Qs-7s-6c, giving me a flush draw and a gutshot straight draw. Bingo!

The blinds checked to the middle position player who bet 600 into the 1,025 pot. I decided to raise to 1,600. Both calling and raising are acceptable options but I prefer raising because our stacks are fairly deep and I want to build a pot such that when I complete my draw I can make a sizable bet and ideally get paid off.

The blinds folded and my primary opponent thought for a few seconds before calling.

This is a bet that most amateur players will make with a hand that is fairly strong, but non-premium. I assumed he had something like K-Q, 7-6, or perhaps three-of-a-kind. I was unsure if he would fold if I raised, but I was fairly certain that if I raised on the turn and then bet large on the river that he would fold (making a river bluff profitable). I also thought that if I raised the turn and bet small that he would call (getting value from my nut hands). So, I raised to 3,000, as I would also do with my premium made hands, such as 9-8 and 7-7.

When you find yourself on the river with the bottom of your range, which will usually be the case when you have a busted draw, it is usually a good idea to bet, especially if you could have some value hands in your range. While most people would bet “large”, perhaps 8,000 into the 10,225 pot, hoping to make their opponent fold, I did not think this specific opponent would fold top pair or better to a standard large bet. In order to steal this pot, I would need to make a bet that my opponent could simply not justify calling.

So, I went all-in for 20,175, betting two times the size of the pot. My opponent thought for around three minutes, counting out the chips as if he was about to call. I remained stoic throughout the process. Eventually he folded 10d-7d, two pair, face up, giving me the pot.

What a relief! Poker is fun.
If you enjoyed this blog post, be sure to check out my interactive poker training site PokerCoaching.com. There I post two weekly quizzes, assign in-depth homework questions, and host an interactive monthly home work review webinar. If you are serious about taking your poker game to the next level, check out PokerCoaching.com.

6 thoughts on “Bluffing off my stack at Borgata”