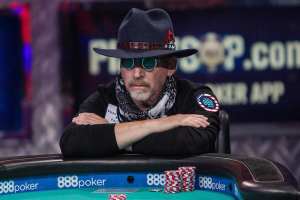 When I made the 2015 WSOP Main Event November Nine at age 61 a big deal was made about age as the Final Table tends to be dominated by young male players.  2015 was especially significant because, while I was older than any previous final table player in the November Nine format, I was joined at this final table by 73-year-old Pierre Neuville, So discussions about age and poker became a big topic.  It had become common knowledge that due to the physical and mental challenge of playing seven full days of poker, that it had become a young person’s game, or, at least, the Main Event was to be forever dominated by players (presumably male) in their 20’s and 30’s.  Even I bought in to the folklore.  And it is true that it takes a long time to build a stack and one mistake, one lapse in concentration to lose it all.

While it is admittedly tougher to concentrate for 13 hours a day for seven days of poker at 60 than it was at 22, I am convinced that the skills, and especially the dedication, that players bring to the table are the key to success.  Do younger players enjoy more success because they can concentrate longer, get tired less or because they are just more prepared?

I have had the pleasure of meeting and befriending a lot of great young players.  They have two things in common: a great aptitude for the math of the game and an incredible dedication to working on their game.  There are abundant online tools to help analyze poker hands.  It used to be just PokerStove, but now there are dozens of powerful tools and the elite players work countless hours away from the table evaluating small nuances of playing a huge number of “interesting” hands.

When I started at Informix in my 20’s, I was unencumbered by life.  I was single, didn’t own a home, had no one and nothing to distract me from my job at Informix.  And the company was mostly like me.  Young, single, dedicated to success.  So we worked long hours and socialized with the people we worked with.  Outside the office, we talked about work.  We were always thinking about how we could do better, have more success.  This was a work environment that I would never come close to duplicating.  Part of it was timing, but a large part of it was changes in life.  Families, time doing homework, going to the kids’ games, work around the house, expanding social relationships – all distractions from absolute dedication to the job.  We started to talk negatively about the workaholics and positively about the need for work/life balance.

The young, elite poker players do not try to balance their lives.  They are almost universally single.  Some, not only have no mortgage, but no home.  They just travel the poker circuit.  Their lives are very unbalanced.  When they are not playing live, they are playing online, and when they are not playing, they are preparing.  The elite players have great skills.  They know the math of the game, but they are constantly analyzing play to improve their skills and to prepare for as many situations as possible in a game where the number of possible situations is close to infinite.  In poker, the game is dominated by the ones who work the hardest, ignore distractions and are tunnel focused on their job.  In business, success also goes to those who are most dedicated to the job at hand.  It has to be a conscious decision to be unbalanced, to dedicate your energy almost exclusively in one direction, and unfortunately, sacrificing anything else that constrains your ability to be the most prepared person at the table, be it a poker table or a conference table.

I am convinced that the Main Event is dominated by young players not because they have more stamina than older players, but just because they are in a time of their lives when they can and choose to work harder, avoid distractions and be more prepared when they sit down to play.  I know dozens of players in their twenties who spend dozens of hours every week, in addition to time playing, analyzing their game.  I know a lot of 50+ poker players.  One of them (Dave) works that hard.  So, I would suggest to those who say the young guys dominate because they are young, that, in fact, they dominate just because they work a lot harder at their game.

Between July and November last year, I had a very unique opportunity (and clear motivation) to work on my game.  I hired a great coach, Amir, spent 100’s of hours reading, analyzing hands, watching videos, taking notes, reviewing ideas and playing hands.  We also put together a stellar team of elite pros for four days of simulations.  We spent many hours developing a final table strategy.  While this was a special case, the reality is that the tools are there for anyone with motivation to dramatically improve their game, regardless of skill level, gender or age.  Explore the wealth of training material available and I will see you in July at the Rio, or maybe, in November.

4 thoughts on “Age and the WSOP by Neil Blumenfield”