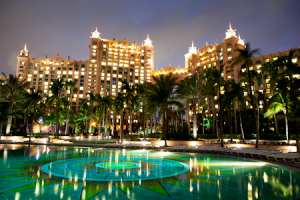 I recently played hand in a $2,200 turbo event at the PokerStars Caribbean Adventure that I think is quite instructional. It demonstrates two key concepts that you must master if you want to succeed at poker tournaments:

With 30,000 effective stacks at 200/400-50 blinds, a splashy player limped from middle position. This was his first time limping in this event, but I thought he almost certainly had a wide range. Of course, he could be limping with a premium hand as a trap but I thought that was rarely the case. Everyone folded to me and I picked up Ah-Jh on the button. I decided to raise to 1,500. By raising to 1,500, I build a pot in position against a hand that is almost certainly behind. When you have your opponent’s range crushed and have position, you should be confident building the pot. I think the limper will call almost every time, regardless of his hand’s actual strength. Most people who limp with a wide range aren’t trying to fold to any reasonable preflop raise. Surprisingly, both players in the blinds called, as well as the initial limper. At this point, all of their ranges are wide open, minus the absolute best hands because those would get reraised preflop.

The flop came Ad-4d-4c, giving me top pair with a good kicker. Everyone checked to me. I think betting a small amount for value is the ideal play. Notice if I bet large, my opponents will only continue with a 4, an Ace, or a flush draw but if I bet small, they may stick around with all sorts of hands I crush. So, I bet 2,000 into the 6,450 pot. Only the initial limper called. I thought his range was a 4, an Ace, an under pair, a flush draw, and perhaps a few unpaired hands.

The turn was the (Ad-4d-4c)-4s, improving me to a full house. My opponent checked. Given my opponent’s likely range, he either has 4 that has me crushed, an Ace that he will never fold to any bet, an under pair that may or may not call a small bet, or a flush draw that he will fold to any bet. Against this range, I should either bet small to extract value from the under pairs or check, hoping to induce my opponent to bluff on the river. Notice that if he happens to have four of a kind, checking ensures I don’t lose a gigantic pot, which is vitally important early in a tournament. Of course, if I thought my opponent was an extreme calling station who would stick around versus any bet with an under pair or a flush draw, I should make a sizable bet. I didn’t assume my opponent was terrible, so I checked.

The river was the (Ad-4d-4c-4s)-Kh. My opponent quickly bet 5,000 into the 10,450 pot. Even though I have an extremely strong hand, there is no point in raising because if my opponent has an Ace, he will never fold and if he happens to have the best hand, I want to minimize my losses. Notice that if he is overvaluing a hand like 8-8, he will almost certainly fold if I raise unless he is an extreme calling station. So, calling is the only play that has merit even though I expect to either win or chop the pot almost every time.

I called and my opponent turned over 5s-2s for absolutely nothing. By making a reasonably sized preflop raise and a small flop bet, I kept my opponent in the pot with a hand that was drawing nearly dead. While he probably thought he would extract a huge amount of value if he improved to a straight, in reality, I would have lost only one or perhaps two additional bets. Especially when playing against someone with a wide range, you must be aware that unless you have a premium postflop hand, you are rarely trying to extract three large streets of value. By checking the turn, I made it impossible for me to lose a huge pot while at the same time, giving my opponent the opportunity to make a sizable blunder, which fortunately for me, he did. 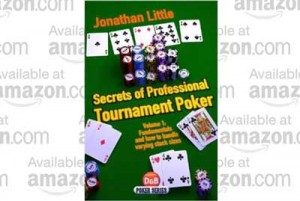 Thanks you for taking the time to read this article. If you enjoyed it, please share it with your friends. If you want to learn more about my complete strategy that I have used to beat poker tournaments over the last 11 years, check out my best-selling series, Secrets of Professional Tournament Poker, Volumes 1-3. Be sure to check back next week for another educational blog post.